October 06, 2007
The battle to save May Dreams Gardens from the moles has begun 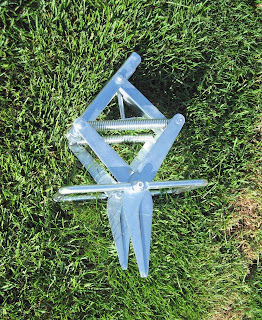 After reading through the comments left on my previous post and doing some of my own online research, I've decided that the surest way to victory is to trap the moles. Then Jodi from Bloomingwriter sent me some additional information on email, which confirmed my decision.

I guess I should say trap and kill the moles as the traps available are designed to swiftly finish off the mole. The one I purchased uses a scissor action to kill the mole, should the unfortunate mole pass through the tunnel over which I have placed this device. It won't be pretty, but it is really the best way.

My research including reading this brochure from Purdue University. From it I learned that:

- There are generally only 2 to 3 moles per acre. This makes me think that there is just one mole running around my lawn and flower beds.

- Moles mainly eat earthworms, and occasionally some grubs, so having moles doesn't mean you also have a bunch of grubs. And they don't eat bulbs or roots.

I do have two concerns about trapping. First, I don't have a very good record when it comes to trapping animals. Remember earlier this summer, I actually trapped a rabbit with a live trap, but then it got away from me. My other concern is that once the trap is sprung by the mole, when I pull it out, according to the directions, I'll know that I killed a mole. I hope that doesn't mean that I'll pull out a mole carcass or half a mole carcass. If I do, I promise, no pictures, unless someone insists.

I did read all the comments on the previous post and I am very appreciative of the advice, suggestions and encouragement.

Several suggested poisoning the mole. I decided that if I am going to kill it, it should be a quick kill and not a slow, potentially painful death. And several suggested deterrents, including daffodils, scents, and sound. If I lived out in the country, I think I'd try the deterrents just to run the moles off or keep them farther away. But here in suburbia, deterring moles from my lawn just forces them over to one neighbor or another, which isn't the neighborly thing to do and doesn't really solve the problem.

So now the trap is set and I'm waiting for the mole to come along and then "snap", the battle ends and the garden is saved. 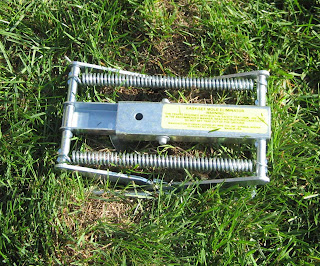 I'll let you know tomorrow if I trap a mole.
pests