October 13, 2007
When the weatherman yesterday said we had a chance of "patchy frost", I didn't catch when. This morning I figured out that "when" was today. These impatiens were slightly touched by the frost. 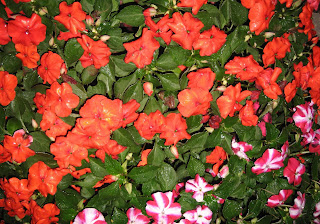 Really, it would have been a "mercy killing" if the frost had killed these two impatiens, with those clashing colors. But, it wasn't a killing frost, so by afternoon, the impatiens looked mostly okay. 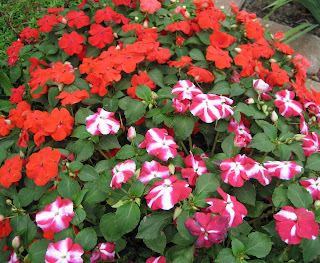 Except they still clash with each other.

But soon enough, we'll have a true killing frost and then I can put these impatiens out of their misery. In the meantime, garden clean up began in earnest this morning. With temperatures barely in the mid-40's, I headed out to the garage to begin task number one on my Saturday to do list, cleaning up the garage enough so that I can start bringing in containers, garden ornaments, and tender bulbs. I was able to mark that off my list by lunchtime.

After lunch, I headed out to the compost bins to turn the contents, and dig out and sift any compost ready to harvest. I had in my mind that there wasn't going to be much compost this fall because I never turned any of it and I didn't try to add the right proportions of green (wet) and brown (dry) plant matter. I just threw in whatever trimmings and rotten vegetables I came across.

But once again I was wrong.

I lifted the top layer of plant material off the first bin, and wow, it was all compost underneath. After sifting through that, I moved on to the second bin. More compost! I only got about half way through that bin when I ran out of time and had to quit for the day. I'll work on it again tomorrow and maybe even a few days after work. There is that much compost!

I'm stockpiling that compost on one of the raised beds in the vegetable garden because I just wasn't prepared to have this much compost right now.

If you are a gardener and you don't have compost bins because you think composting is too complicated, think again! It's easy. Here's what I do.

I have three bins, each approximately three feet by three feet, one cubic yard.

I throw in whatever I have, paying no attention to what's green and what's brown.

I water the vegetable garden with a sprinkler and since that is where the compost bins are, they get "watered" about once a week, too, if we don't have rain.

In the fall, I remove the top six or so inches of plant material that hasn't decomposed, and then shovel the finished compost into a compost sieve that sits on top of my wheelbarrow. I made the sieve myself with scraps of lumber and hardware cloth. What doesn't go through the sieve goes back into a compost bin.

There are just a few things you should not do with compost. Don't put dog or cat poo, meat, or some weeds like purslane, into your compost bins. Don't try to compost in less then a three foot by three foot bin. You won't get good heat build up in that pile, which is necessary for the composting process.

That's really about it. Compost just happens! It's one of the many miracles of the garden.

Here's an update on my 'to do' list for Saturday.

1. Straighten up the garage enough so I can start to bring in garden ornaments, pots and summer flowering bulbs that would not make it outdoors in an Indiana winter.
2. Harvest some compost from the compost bins, prep them to be filled again. (In progress)
3. Weed and clean up the vegetable garden, pick tomatoes and peppers.
4. Water trees (which I can do with a sprinkler, so it won't take much time.)
5. Go buy a new tree. Plant the tree.
6. Check for moles. (Didn't find any!)
7. Take pictures for Garden Bloggers' Bloom Day.
8. Read a chapter or more in the current selection for the Garden Bloggers' Book Club, Green Thoughts: A Writer in the Garden by Eleanor Perényi.
9. Start to put some stuff away in the garage.
10. Empty the worst of the container plantings that are more eye sores than anything else.
11. Inventory all bulbs purchased for fall planting and determine where to plant them. I won't plant them for awhile yet, and no, it is not helpful for anyone to point out that planning should have been done before buying.
12. Dig out the forsythia that came back after I cut it down to the ground.

Guess what I am doing tomorrow?
compost weather