Our Thoughts Turn To Trees

October 11, 2007
Honeylocust (Gleditsia triacanthos) on a cold, cloudy afternoon, the first tree in my garden to lose its leaves. 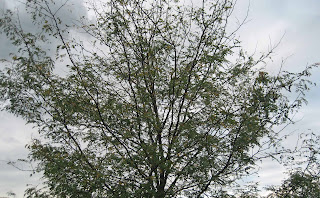 Thoughts turn to trees when it finally feels like fall.

Suddenly we need jackets and sweaters. Suddenly, it’s time to turn the compost and clear out the bins so they can be filled again. It’s time put away the delicate garden ornaments that won’t last long in an Indiana winter. It’s time to finish cleaning up the garden and it’s time to get out the leaf rakes.

It’s time to think about trees!

Fall is the best time to plant trees and look at trees.

I’ve been thinking of a couple of places where I might squeeze in another tree or trees. I just might head out to the nursery this weekend to see what’s available. I’d really like a smaller flowering tree, and have always admired from afar the Carolina Silverbell, Halesia carolina. Does anyone else have one? Do you like it?

I added a link to my sidebar, upper right, for the Leaf Cams that show fall foliage color around Indiana. May I recommend the Brown County leaf cam as probably the best one? We are still a few weeks from peak color, so check back later, too.

People alert me when trees are being abused.

I was minding my own business at work when a friend sent me an email asking if I had seen the workers “whacking back the trees by the back parking lot”. I get to work in the dark so I had not seen them. As soon as I read the email, I flew out of my chair and made haste to the nearest window, like a six year old who has just been told it’s snowing, and yep, there were the workers, hacking up a row of hawthorn (Crataegus sp.) trees. The trees look terrible now, and they aren’t done trimming. Tomorrow it looks like they will be in the front parking lot using their evil chain saws to disfigure more trees. There ought to be a law… and no, there really isn’t anything I can do about it.

One was from my mom, the other from my sister. They had an arborist trim a big sugar maple (Acer saccharum) and a big scarlet oak (Quercus coccinea) in their front yard. They were pleased with the results, because he did it right. Then he checked out three pin oaks (Quercus palustris) in the new neighbors’ backyard and told them he though they had Oak Wilt and if they did, all of them needed to be cut down. Plus there was a chance if it was Oak Wilt, it could spread to the oak in my sister’s front yard.

Well, I hadn’t hear of Oak Wilt, so I looked up some information later in the evening and sent my sister an email recommending that they call their county extension agent and ask him to look at the trees to see if they really had Oak Wilt. I recommended this for two reasons. First, the county extension agent should be unbiased as he would have nothing to gain either way, and second if it was Oak Wilt, I assumed they would want to know and report it to the state.

I wrote a post about these pin oak trees last summer and noticed that a lot of people searching on “when is the best time to plant a tree” landed on that post. I’m sure they found it helpful that my first answer was “50 years ago”.

We would have all been heartsick if these trees did have Oak Wilt and had to be cut down.

But the news was good. My sister told me later today that they took leaf samples to the county extension agent who said it was not Oak Wilt. The symptoms were caused by drought. I suggested that they water the entire backyard thoroughly several times this fall, just to give these trees a little extra moisture for the winter. Then I think they’ll be okay. I think I’ll do the same for my trees. They all look pretty droopy.

I did wonder why I had never heard of Oak Wilt, having spent four years at Purdue University studying horticulture in another lifetime. Could I have forgotten that much? I know I’ve forgotten a lot, but it seems like I would have remembered Oak Wilt. Then I read on another web site that Oak Wilt was first discovered here in the Midwest in the mid 1980’s. That would be after, ummm, I graduated from college, so they wouldn’t have taught us about it.

Good! My memory is fine.

Now, what were talking about?