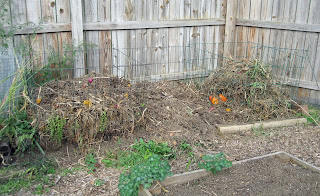 My compost bins sit half-emptied, exactly as I left them yesterday. The bin on the right is the one I emptied first, and then I put the top layers of uncomposted material into that bin. Then I moved on to the center bin and started to shovel out and sift the compost in that bin.

As I was doing that, out of nowhere comes... a yellow jacket. Since I was stung earlier this fall by yellow jackets, I was a little concerned. But not enough concerned to stop what I was doing, because I was so happy about all the compost.

I swatted the yellow jacket away a couple of times, and then got into a wild jousting match with it, which resulted it in getting caught up under the cuff of my glove and, you guessed it, stinging me.

Stung again! This time, I didn't stop what I was doing, I just went about my business, since it was close to the time I needed to stop, anyway.

Later in the evening, I noticed that my hand was 'slightly swollen' and a little bit itchy where I had been stung. I got to thinking about the cumulative effect of being stung. I've heard that the more you are stung, the more likely it is that you will have a strong adverse reaction to being stung.

Then this morning I was thinking about how several people had commented on my previous post about running into yellow jacket nests while trimming or mowing, so I know yellow jackets can and do nest near the ground.

And I thought about it some more and wondered if perhaps there is a yellow jacket nest in or near the compost bins?

So I went out to the compost bins this afternoon and stood there for awhile to see if there were yellow jackets coming and going in that general area. I didn't see any, but still decided to be cautious and wait until colder weather to harvest more compost. In the meantime, I mowed the lawn, which wasn't on my To Do list, but I added it so I can get credit for doing it and have the satisification of crossing it off my list as 'done'. And I know I'm not the only one who has done that!

One other good thing came out of working in the compost bins yesterday, besides all that good compost.

I solved a mystery! I found the gloves I lost last summer, that I swore the garden fairies took when my back was turned. They were in the bottom of the compost bin. 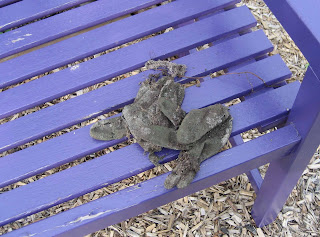 They were weeding gloves that have the rubberized fingers. All the cotton parts composted, the rest was 'well on its way' to composting. Hey, idea! Maybe someone should promote that their garden gloves are compostable when worn out? That's right! Instead of throwing away your garden gloves, throw them in the compost bin! I know it would work with all-cotton gloves.

Here's a final look at my To Do list for this weekend.

1. Straighten up the garage enough so I can start to bring in garden ornaments, pots and summer flowering bulbs that would not make it outdoors in an Indiana winter.
2. Harvest some compost from the compost bins, prep them to be filled again. (On hold until colder weather sets in or the source of the yellow jackets found.)
3. Weed and clean up the vegetable garden, pick tomatoes and peppers. (I did weed two raised beds but decided to wait until after it rains tomorrow to do any more harvesting.)
4. Water trees (which I can do with a sprinkler, so it won't take much time.)
5. Go buy a new tree. Plant the tree. (I've decided to call the best tree nursery in town and see if I can buy a Carolina Silverbell over the phone and have it delivered. Second choice may be a Katsura tree, recommend by Caroline Gail. I'll see what they have.)
6. Check for moles>. (Still didn't trap any! On Sunday I moved the trap.)
7. Take pictures for Garden Bloggers' Bloom Day. (My post will be up later this evening.)
8. Read a chapter or more in the current selection for the Garden Bloggers' Book Club, Green Thoughts: A Writer in the Garden by Eleanor Perényi. (I'll do this tonight before I go to bed.
9. Start to put some stuff away in the garage.)
10. Empty the worst of the container plantings that are more eye sores than anything else. (I didn't empty any, but I did water them all.)
11. Inventory all bulbs purchased for fall planting and determine where to plant them. I won't plant them for awhile yet, and no, it is not helpful for anyone to point out that planning should have been done before buying. (I did buy 50 more tulip bulbs and 25 iris bulbs because they were marking them down 40% as I went past a display of them earlier today while grocery shopping).
12. Dig out the forsythia that came back after I cut it down to the ground.
13. Mow the lawn. (Added so I could get credit for it!)
gardening pests weeding