You Can't Escape The Past in Your Garden

While out weeding earlier today, I found some good memories and some bad memories in my garden

Let’s go quickly through the three bad memories, because who really wants to dwell on bad memories? I won’t even post pictures of them. They are moneywort (Lysimachia nummularia), a variegated Sweet Annie (Artemisia annua), and tansy (Tancetum vulgare).

These three plants all looked so innocent when I purchased them and planted them way back when. They were probably growing in little four inch pots or something, all contained and looking like pretty little plants. I probably convinced myself that I could keep them under control. In my garden, they would behave.

They are pretty plants, but they all like to take over too much and they did not behave. For years, I’ve been pulling them out as weeds wherever I’ve found them still growing in my garden. Today, I found more moneywort and the variegated Sweet Annie, but no tansy. Maybe after nine years, I’ve finally gotten rid of the tansy? 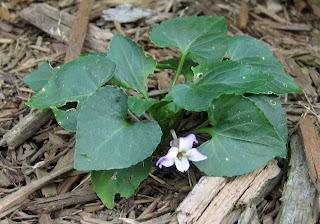 This came up where I once had planted Viola mandschurica, ‘Fuji Dawn’, which is a variegated leaf violet. Those came back for a few years each spring, but then disappeared several years ago. They are ‘marginally hardy’ for me, so I decided they had just had quite enough of the cold temperatures. This one isn’t variegated, but it has a pretty little flower, so I’m leaving it. Who knows, maybe next year, it will have some variegated leaves? 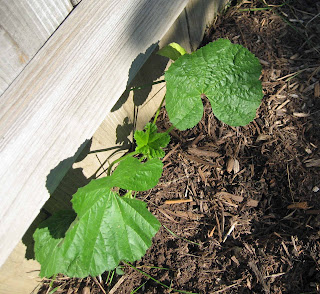 When I saw this seedling, I remembered that I had several hollyhocks planted along this section of fence maybe six or seven years ago. I liked them but it seemed as though right when they were at their peak of height and flower, on cue, a thunderstorm would brew up and know them all down. I got tired of tying them all up after the storms, so one summer I yanked them all out before they set seed. Since these are biennials, none came back for several years. But then today, while weeding, I encountered this seedling. I decided that I miss the hollyhocks, so this seedling gets to stay, too. 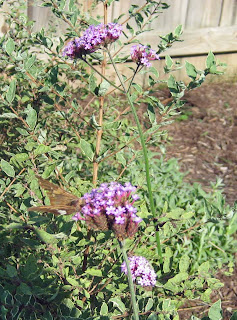 Seeing this verbena (Verbena bonariensis) now I can’t imagine what I was thinking or not thinking when I decided that it was a little too “free spirited” for my garden. It seemed to come up everywhere, and I must have been going through a “neat and tidy” garden phase to have ripped this one out. But let’s put the past behind us, shall we? The butterflies love it and it is blooming at a time when other flowers generally aren’t. All is forgiven and I’ve decided that if it wants to, this verbena can stay and self-sow a bit in my garden again.

What past memories do you find in your garden while weeding?
perennials weeds