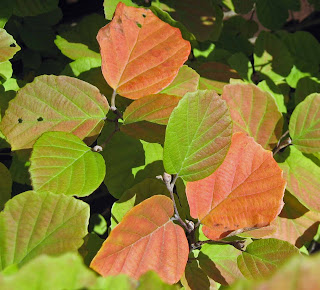 And speaking of "how's come", is that a Hoosierism, a particular figure of speech common among people who are from Indiana? Or do others phrase questions that way, too?

When I was at a garden center a few weeks ago, the helpful sales person suggested that I get some Fothergilla shrubs, but I passed, explaining that I already had some. "Good choice", he said and we agreed that more people should plant Dwarf Fothergill, Fothergilla gardenii, especially.

- white, bottle-brush flowers in the spring
- clear, green foliage all summer long
- no pruning required as it doesn't seem to get more than three or four feet tall
- no known pests or diseases, at least in my garden
- does well in a moderate drought without additional watering, at least it did in my garden

And if that isn't enough to make everyone run out and buy some of these shrubs, wait a minute, because I haven't told you about its best feature.

The close up picture of the foliage above was taken in bright sunlight a week or so ago, just as the leaves were starting to turn.

The picture below was taken a few hours ago, right before sunset on this cold, cloudy day, so it's not the best picture, but you get the idea. 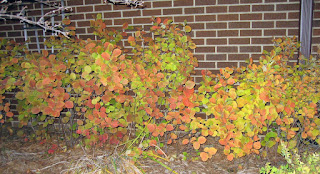 Why don't people plant more Fothergilla? What am I missing? What are they missing?
shrubs