Handmade Gifts For Gardeners, Idea No. 1 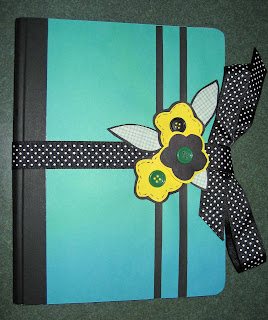 When I posted the gardening geek's guide to gift giving I wrapped it up with a promise to post about hand made gifts for gardeners... tomorrow.

Tomorrow is now today (plus a few days), so here's the first idea for a hand made gift.

Several years ago, a friend gave me this handmade garden journal. She bought a composition book, added a ribbon around the middle with enough of the "ends" hanging off it to tie it off. Then she embellished the journal with with some paper leaves and flowers with button centers, and presto... a garden journal.

I'll confess that because I have a ten year garden journal, I haven't used this one all that much. But when I looked through it tonight, it did yield up a few memories.

One of the memories is this list of "garden ideas to pursue" that I wrote in August of 2003. 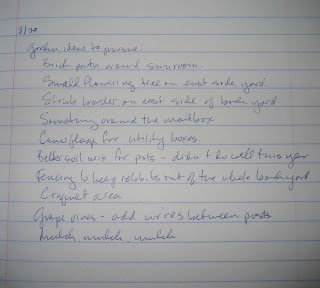 I'll spare you trying to read the handwriting and let you know that I've actually taken action on two, maybe four of these ideas...

"Grape vines, add wires between posts". Hey, I did that the spring after I wrote it. That's pretty good, huh? I had tons of grapes this year, all growing on those wires I strung between those posts.

"Small flowering tree on east side yard". Got that done, sort of, last week when I planted a ginkgo tree. It won't flower and some day it will be a pretty big tree, but it's in the east side yard. Check and done! (Three years later).

"Better soil mix for pots - didn't do well this year". I more or less fixed that by default the next spring by getting the basic materials for my potting soil mix from a different source.

"Mulch, mulch, mulch" I'm also doing this one, by default. Isn't everyone?

I'm still working on the rest of the list. Some of it I'll do eventually, some of it I'll never do, like 'croquet area'. I have no idea what I was thinking on that one. I should cross that off and write in 'more hiding places for Easter eggs', since the annual family egg hunt is in my backyard. That would make a lot more sense. Geez? Croquet?

Anyway, what gardener wouldn't appreciate a hand made garden journal?

Tomorrow... idea no. 2 for hand made gift for gardeners.
gardeners