Underachieving Perennials at May Dreams Gardens 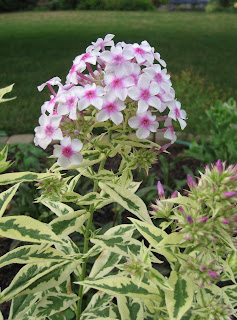 Here at May Dreams Gardens, I’d like to give everyone the impression that all plants grow to their fullest potential. There are no under-achieving plants in my garden!

This will be therapeutic for me, plus perhaps someone might read this and have some good advice for me to follow to turn my failure into success.

I would love to grow a decent Delphinium, but have failed to do so.

At my previous garden, years ago, I did manage to buy a Delphinium, plant it in the garden and have it bloom. But then it died and didn’t come back. After that experience, and after reading that Delphiniums just don’t do well around here, I gave up. Perennials that behave as annuals and disappear after one year can get quite expensive.

Then last December, Kathy at Cold Climate Gardening wrote a post that mentioned the Foerster hybrid Delphiniums and I decided I should try to grow Delphiniums again.

I found a seed source online and ordered up two packets of seed. I sowed one packet of seed in the spring and got a very high percentage that germinated. My excitement grew, and I started to plan where I would put all these Delphiniums and how I would stake those tall spires of blue flowers in my garden.

Carefully, gently, as the seedlings grew I planted each in its own container. They survived, they continued to grow, but they were still inside.

Once it was reliably warm outside, I decided that my little Delphinium seedlings should go outside to begin to harden off and face the real world. One, two weeks went by. All looked good.

Then one day, I looked closer at my little seedlings and found that something was eating their leaves. Could it be chipmunks? Rabbits? Slugs? I looked and could find nothing obvious eating them. So I set them up on a bench, thinking that if it was chipmunks or rabbits they’d be safe up higher.

The next day, there were hardly any leaves remaining and I found a tiny green worm on what was left of one stem.

But even though my little seedlings no longer had leaves, like any gardener, I continued to water them, hoping that there was just enough of something left, a few plant cells perhaps, to grow another leaf or two, and one or two seedlings would make it.

Soon, I was just watering pots of dirt with no sign of the Delphinums. Finally, in late October I dumped the dirt out of the pots and thought about what might have been.

I had underachieved, failed, again in my quest to grow Delphiniums.

But I’m not giving up! I’ve come too far, invested too much, dreamed too long. I still have the second packet of seeds, which I’ve kept in the refrigerator. I’m going to attempt to winter sow them, and hopefully get a few seedlings with that method. Plus, I’m going to order more seeds to sow again this spring.

I want to be successful at growing Delphiniums. Does anyone have any advice for me?

(By the way, the picture above is obviously not a Delphinium. It is Phlox ‘Crème de Menthe’, a favorite perennial in my garden. Wouldn’t it look good with some tall Delphiniums growing behind it?)
perennials