Today is a better day for dreaming than gardening.

Dire weather forecasts for this weekend called for snow, slush, rain, ice and wind, and some weatherman even said the "B" word... blizzard.

The reality was we got some snow yesterday, but temperatures were warm enough that roads were slushy not icy.

Then later around 11:00 PM, it started to rain. But the weathermen insisted we would also get some snow on top of the ice.

And they were right, but I don't think we got as much accumulation as they predicted.

I must confess that I took my outdoor pictures for Garden Bloggers Bloom Day on the 14th, when the raised bed vegetable garden looked like this. 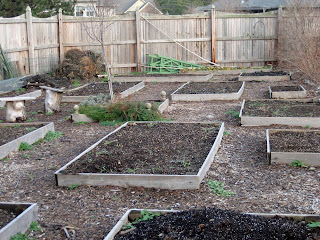 I wanted to get my post up so people could leave their comments about their own bloom day posts. Plus, like everyone else, weekends right now are busy so it made sense to fudge it a bit and post blooms from the 14th. 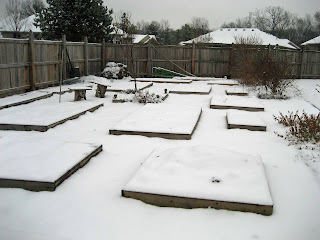 I doubt I would have found the little vinca flower in all this, if I had waited until the 15th to take my pictures. 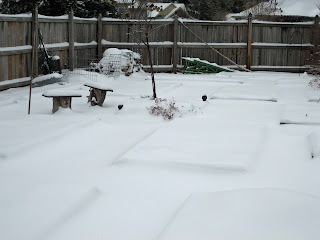 It is not nearly as much snow as predicted, but it's enough that I got out my new snowblower.

Clearing snow off the driveway is sort of like mowing the grass.

- You can work up a good sweat, just like mowing. The difference is you don't really get hot, like you would in the summer, so you don't realize how hard you've been working. That's how some people over exert themselves and ending up in the hospital or worse. If you aren't in good enough shape to mow your own lawn, don't try to shovel or clear the snow off your driveway.

- You get some satisfaction of a job well done when you see the driveway all cleared off, but you know you are likely to have to do it again, just like with mowing.

There is one key difference between mowing the lawn and clearing snow off a driveway. Do you know what it is?

If you don't mow the lawn, the grass just gets taller and taller and when you eventually do it, it is a lot of work.

If you don't clear the snow off your driveway, eventually it gets warmer, the snow melts and you don't have to do it at all! High of 42 by Tuesday, so this snow will turn to sloppy wet in no time at all!