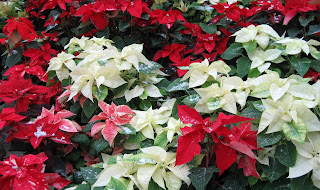 Many people express surprise that my potted poinsettias are not real plants. They are fakes, artificial, silk, whatever term you'd like to use, and thus have been "blooming" reliably every December for, gosh I don't know, at least five years maybe ten.

My reason for having these fake poinsettias is because where I have them, on a fireplace hearth, is no place for a real plant. I'd have to move them every time there was a fire going in the fireplace and there isn't enough light there, anyway.

There wasn't enough light for anything today. It was so gloomy, rainy that I looked forward to sunset because then at least it would just be dark, but we'll discuss that some other time.

It was a good day to go to some local greenhouses to check out their poinsettia displays, which is just what I did, but more on that later, too. (The picture above is of some of the poinsettias I saw at one of those greenhouses.)

For now, how about a quiz on poinsettias? Can you tell if a poinsettia is real or fake? Even Jodi at Bloomingwriter noted, "In recent years 'silk' poinsettias and other flowers have become so lifelike that it's hard to tell the difference until you touch one." 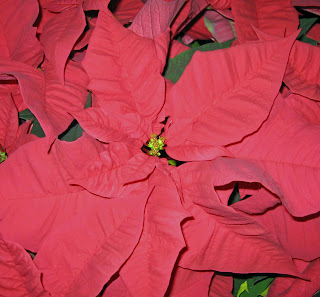 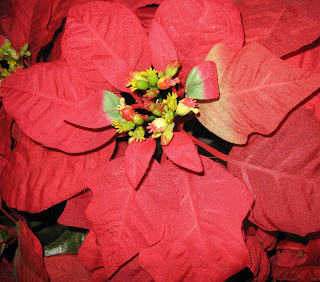 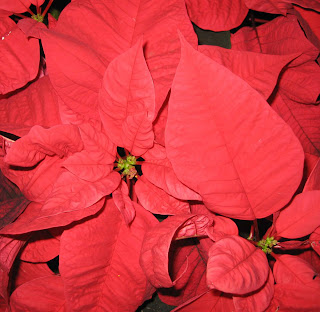 Leave your answers in the comments. I'll reveal the answers tomorrow and also tell you more about two places where poinsettias, real poinsettias, are on display in Indianapolis.
holidays indoor gardening