Bold Repotting to Clean Up a Big Mess

January 17, 2008
Through some bold repotting, I've cleaned up a big mess in my sunroom, a mess which has nagged at me for quite some time.

It's still embarrasing to admit. I had mealybugs and I've had them for a long time.

I don't know where the mealybugs came from. One day they were just there. They could have come in on a new plant or perhaps they saw me as I walked by a plant display in a store, and hitched a ride on my coat to my sun room.

Regardless of how they came to be in my sun room, I could no longer deny they were there. Over time, they would attack various plants, and I'd swing into action to get rid of them. I even lost a few plants along the way that were just too weak to survive these sap sucking pests.

But finally, I managed to contain them so that they were primarily on my aloe plants. 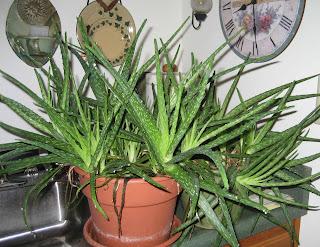 These are not just any aloe plants, or I would have tossed them out and bought new ones. These were aloe plants that came from an aloe plant my grandmother had, so they had to be saved.

So a few weeks ago, I took matters into my own hands and decided that only a bold move on my part would rid me of these buggers, once and for all. I would have to repot the aloe.

The first thing I did was pull all the aloe out of the pots. 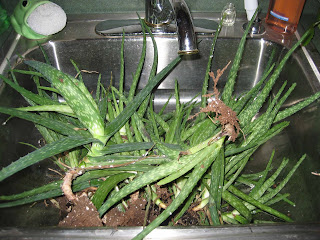 Do not click on the picture to try to see the mealybugs, you'll embarrass me for having "unclean plants", even though I don't think it was my fault.

Then I cut away the the bigger, older stems of aloe and those that were housing the most mealybugs, which left me with these cuttings. 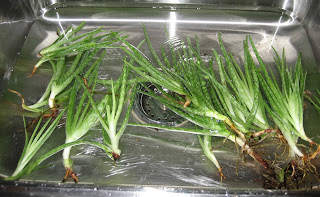 I let the cuttings soak in the sink a bit while I took the pots they were in to another sink in the garaged and scrubbed them out.

These are the cuttings I threw out. 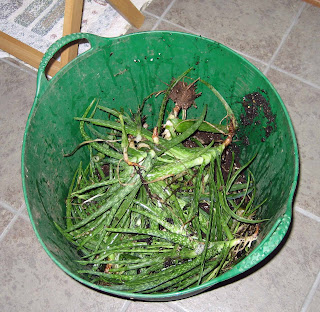 Or rather, this is what I threw out into the compost bin. I doubt those mealybugs will survive outside in the winter time. Death by freezing! I rid myself of mealybugs.

And here are my newly potted up aloe plants. 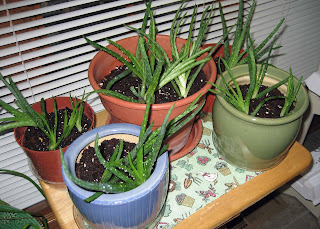 After over a week, there are no signs of mealybugs, so I hereby declare victory. I won! Let's all do the Crazy Plant Lady Happy Plant Dance. Or, if you prefer, and I do, let's all go out and buy ourselves a new house plant to celebrate.

By the way, because of my bold repotting, I now have five pots of aloe instead of three. But I'll end up with just one pot of aloe, or maybe three.

The two 'pretty pots' up front actually belong to my 'sister who does not garden'. I had potted up some aloe for her in those pots years ago and she put them in her sunroom which has better light than mine (no fair!). They grew like mad and kept falling over from being top heavy, so she brought them back to me to thin out and repot. Then when they were here, the mealybugs moved in, so I couldn't give them back.

She's never asked about them since she brought them back to me, so I bet I'll get to keep those.

The two smaller pots on each side of the bigger pot in the back are for my two other sisters. They'll each want an aloe plant, once they read this post and realize that I still have Grandma's Aloe Plant. Just watch the comments and you'll see.

Finally, if you remember nothing else from this post, I'll hope you'll remember that sometimes a plant problem or any problem, requires a bold move or decisive action to solve it. Once solved, you can end up with more than you had before.

So what's bugging your plants? Be bold, take care of it!
indoor gardening

Kathy said…
Remember, you gave the neices starts of this plant for Easter a few years ago? We still have them. I think I have 3 or 4 pots of aloe. I repotted everything a couple of weeks ago.
Kathy, the older sister
Fri Jan 18, 05:34:00 AM 2008

Carol Michel said…
Oh yes, I remember now! That was the last time I repotted these, pre-mealybugs. I potted up the 'extras' to put in the Easter baskets of all the neices and nephews.
Fri Jan 18, 06:23:00 AM 2008

Sherry at the Zoo said…
Well, I have to admit that all of my aloe plants died (remember, I got the brown thumb?) Anyway, I would love to have another chance. So, how about I take Kathy's and mine? That way Sophie could raise one as well. Maybe hers will survive!
Fri Jan 18, 06:34:00 AM 2008

Kathy said…
I would continue to keep an eye on those plants. There might be one tiny mealy bug down in a crevice, just waiting to make another whole mealy bug city.
Fri Jan 18, 07:20:00 AM 2008

Lisa at Greenbow said…
This aloe plant reminds me of the difficulty I had trying to find one for my Dad after the tornado destroyed his house several years ago. He mentinoned to me that he wanted one to replace the one he lost and I shopped and shopped. It is one of those things that you can't find if you want it. It seemed that these aloes had fallen out of favor due to the more exotic aloes coming into the market. I gave up then finally stumbled upon one this past spring. He was very happy to receive it.
Fri Jan 18, 07:28:00 AM 2008

Frances, said…
Thanks for that saga. Did you wash the bugs off with soapy water or use alcohol or just water? When the orchids got some kind of infestation, neem oil did the trick and is also a fungicide. Have you ever used it?

Nicole said…
Ha-this pest eradication must be going through the air-just this morning I went on a rampage to rid my potted bougainvilleas of whiteflies and was doing the washing with soapy water in the bathroom sink thing.
Fri Jan 18, 09:04:00 AM 2008

RuthieJ said…
Way to go, Carol! Lots of work but well worth the results.
Question for you: will those Asian Lady Beetles that get into my house every fall (and I'm still finding every now and then) eat those mealy bugs? (or any other bugs on houseplants?) I know they were brought in to control bugs on soybean plants, and I've heard they might work for house plants too.
Fri Jan 18, 09:24:00 AM 2008

Carol Michel said…
Sherry, Yes, I may let you 'adopt' the aloe plants, BUT, I'll need to check some references, complete a home visitation to see if you have a suitable place in mind, and interview you to make sure you are serious about caring for these!

Kathy, Oh, I will. I've learned my lesson and I will continue to be vigilant.

Lisa at Greenbow, Sometimes it's true, the common houseplants are hard to find with all the "new, improved" varieties taking over. Give me a plain ol' aloe any day!

Frances, I have not used Neem Oil but I have heard of it. I washed these off in plain water and inspected them closely. Plus I hope the aloe were underwater long enough to drown any mealybugs that I didn't wash off.

Nicole, White flies sounds like an awful thing to have indoors.

Christine, Yes, do both a dance and buy a plant! I'm happy to provide your reason for doing so.

Curtis, I sure hope I don't have anything else other than mealybugs.

RuthieJ, Good question. I assume those lady bugs have to eat something, so why not the mealybugs? However, I wouldn't want to keep the lady bugs around inside for indoor "Integrated Pest Management".

Vonlafin, Scale! Inside on house plants? I hope that doesn't happen in my house and you have my sympathy if you ended up with scale on your house plants or in your greenhouse.

Debbie, Thanks, it took me a few years, but I finally just took matter into my hands!