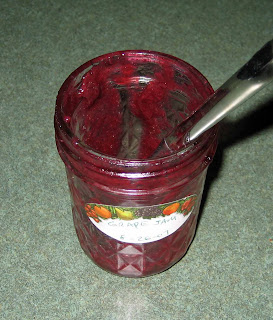 Oh my heavens, I discovered an old post a few days ago and realized that last year I did write and publish some resolutions for the new year.

I could barely bring myself to read them, sure that I had probably failed on all most of them. Then tonight I finally looked at them and decided that I did pretty good. Good on some, not so good on others, but pretty good overall.

One of the resolutions was to use up all the produce from the garden and not leave any hanging on the vine to be zapped by the inevitable killing frost.

I’m pretty proud of how I did on this one, especially how I used up my grapes.

As the bunches of grapes ripened in late August, I had sort of hoped that the birds would get to them before I did because there were so many of them. But they didn’t, so I picked big bunches of grapes and made my first ever batch of grape jam.

My, was it good! I surprised myself with how good it was.

In a way, the jam was a happy accident. As I was squeezing all the pulp out of the grapes, I realized the recipe called for five pounds of grapes. Five pounds? How do you figure out how much is “five pounds” when you don’t have a kitchen scales?

Close enough! It worked. The jam was delicious and a good consistency. I’ve had some on my toast every morning since I made it and just finished the last jar of it a few days ago.

I hope now I am rewarded with more grapes this year so I can make some more jam. And this time the jam will be even better because I’ve got some new kitchen scales to use to figure out how much is five pounds.

Now what else to do with those scales? I know! I can weigh my big tomatoes so I can accurately brag about just how big they really are!

Anyone want to join me in a little friendly competition to see who can grow the 'Biggest Tomato of 2008'? I thought I'd ask now so when you buy your tomato seeds, you can get a variety or two that might produce a really big tomato, big enough to try to beat me.
fruits vegetables

Christine said…
I actually bought an old post office scale at a garage sale years ago. I use it ALL the time. But I love your idea of weighing yourself and then with the bowl. VERY cute.
Fri Jan 11, 06:11:00 PM 2008

Lisa at Greenbow said…
Where I used to live I had grape vines. I made grape jelly every year from my grapes. Yummm it was good. Just seeing your jar of jelly makes me hungry. It also set my mind to wondering where I could plant some grapes this spring.
Fri Jan 11, 06:44:00 PM 2008

jodi said…
Oh, you've just created a desire for grape jelly (I love it on english muffins with egg and ham and cheese...yes, really)! I let the birds eat all our grapes given that I hadn't expect grapes and they came on late in the season, so i'll have to succumb to the urge and buy a jar!
As for the tomatoes...given my talent for not getting tomatoes planted in time in the greenhouse, I'll just cheer the rest of you on! I do plan to have some heritage tomatoes, of course...but they won't be giants...
Fri Jan 11, 09:10:00 PM 2008

Entangled said…
A Big Tomato contest might be fun. I'm going to try staking and pruning them this year, instead of caging, hoping for fewer but better tomatoes.
Sat Jan 12, 07:24:00 AM 2008

Molly said…
I'm in, just for the fun of it, because Stupice just doesn't get very big. (That's called a hustle, I believe. I actually grew some pretty decent sized tomatoes last year in the summer that wasn't.)

Leslie said…
I don't seem to grow lots of big tomatoes...although I'm tempted to try harder this year. Maybe I'll wait to buy a scale until it looks like I might have something worth weighing!
Sat Jan 12, 09:52:00 PM 2008

Carol said…
Christine, necessity is the mother of invention, right? I am surprised no one asked why I didn't just weigh the bowl of grapes on the 'people scales'.

Lisa at Greenbow, the grapes are fun to have. Mine serve as a 'divider' between the raised bed vegetable garden and the rest of the yard. I need to prune them way back this early spring.

Steven, I bet if we have a friendly competition you'll start rounding up!

Jodi, If you end up with a big tomato and change your mind about our little competition, you can always join in later. I can't even think about store bought grape jam right now. It just wouldn't be the same!

Entangled, I'm looking forward to seeing if the staking makes a difference for you.

Sherry, but my dirt is getting pretty good, too. 'Game on'.

Eleanor, Oops, did I not offer you any?

Molly, Sounds like you will be quite the competitor. I'm looking forward to seeing what you have in bloom and I'm going to look up this 'Stupice' to see what it is all about.

NatureGirl, You MUST grow some tomatoes. They are so good when you grow them yourself.

RuthieJ said…
Hi Carol,
I made wild grape jelly last summer also from the grapes my birds didn't get. It was so good! and a great success for my first attempt at making jelly. I'm looking forward to making more this next summer.
Tue Jan 15, 05:38:00 PM 2008