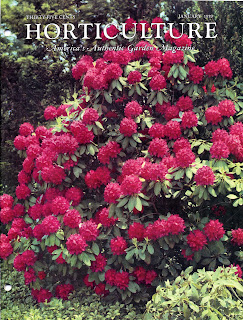 After some intense bidding at an estate auction many years ago, a co-worker became the proud owner of a box of old issues of Horticulture magazine for a final bid of one dollar.

She brought the magazines in to work and offered to give me a set from any year I wanted.

Every once in a while, I look through these old magazines and read an article or two to find out what gardening was like in the middle of the twentieth century.

For one thing, they paid less for their gardening magazines in 1959. Mrs. John L. Pope of Acton, Indiana, whose address label is still on the cover of the magazines, paid 35 cents for an issue, four dollars for an entire year's subscription. Each issue was around 54 - 60 pages, a little over half of what we get today in Horticulture magazine.

A look at the table of contents from the January issue reveals some of the topics of the day.

There is a lot of advertising in the magazine, much of it from companies still in business today. Other ads are from companies long gone, or at least I don't recognize them.

Of course, all of the prices were considerably less than what we pay today for our plants and seeds.

You could go on a garden tour of the British Isles for $1,291, all inclusive. This was no two week tour. This was for a 41 day tour led by Prof. Chas. L. Thayer, fomer head of the Dept. of Floriculture, University of Massachusetts, sailing on the RMS Queen Elizabeth, leaving May 13. Stops included South England, Chelsea Flower Show in London, the lake country, midlands, Wales, South and North Ireland and Scotland.
Unfortunately, I'm 49 years too late for this tour and besides, that is right in the middle of the peak gardening season here at May Dreams Gardens.

If travel wasn't in your budget in 1959, Burpee Seeds offered a 'get acquainted' package of seven flower seed packets, a two dollar value, for just one dollar.

Or for one dollar you could get three giant Ballerina begonias from the Inter-State Nurseries.

There aren't too many pictures of people in these magazines from 1959 and most of the pictures are in black and white. The few people pictured are mostly in ads, and they were quite dressed up compared to how we generally dress for gardening, or anything, today.

The man pictured in this ad for a garden tractor looks a little like Ward Cleaver from the TV series, "Leave it to Beaver". 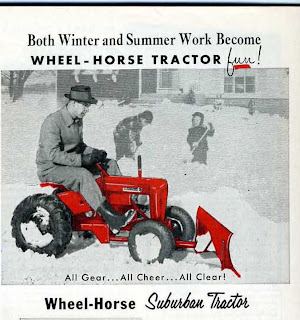 That's quite a nice hat.

But it isn't quite as nice as the hat this 'lady gardener' is wearing in this ad. 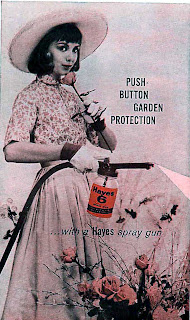 She seems quite dressed up for spraying chemicals in her garden while smelling a rose. At least she is protecting her hands with a good pair of gloves. Rachel Carson's book "Silent Spring" wasn't published until 1962, so the use of a variety of pesticides seemed more commonly accepted in the 1950's. Fortunately, or hopefully, we garden with far fewer chemicals today and women don't dress up like that to garden.

In 1959, 'Ivory Fashion' made its debut as an All-American Award winning rose. 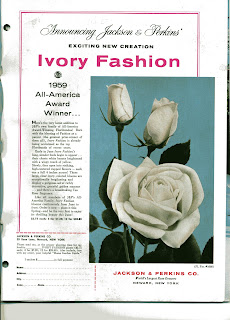 I don't believe I've ever seen or even heard of this variety of rose, advertised at the time as an "exciting new creation". At least one rose grower overseas is offering it now, "bringing it back from obscurity". It was described as a floribunda with big 4 inch flowers, ivory petals with gold stamens, fragrant, and blooming continuously to frost. You could buy one plant for $2.75 or three for $7.20 from Jackson & Perkins Co.

Throughout the various articles and advertisements in these issues from 1959, there are many flower varieties listed that no longer exist today, or at best would be hard to find, but the basic practices and principles of gardening still seem much the same.

These quotes from some of the articles could have been written today.

"While cold and snow reign outside, there is much to do indoors to keep occupied, particularly if the house-plant collection is varied. There are yellow leaves to remove and faded flowers, too. Weekly inspection of the plants to catch insect pests and diseases as they appear pays off in the end, for it is simpler to keep plants healthy than to revive sickly ones."

"It takes more than one tree to make a forest. The same principle is true, to a degree, in a flower garden. Whereas some plants have individual character and beauty, others are most effective in groups so that the massed color of their leaves or flowers becomes an important element in the landscape."

"If you have a dash of the creator in you (and what true gardener hasn't?), growing plants from seed is always more satisfying than trying for a head start with bulbs, roots, or cuttings."

It's fun to look back to see 'how it was' occasionally, to remind ourselves about what is the same and what is quite different. Now I'm looking forward to this spring in my own garden, "the best one yet" at least on paper and in my mind, and hopefully in reality.
gardening