January 04, 2008
Gardeners face decisions every year about what to do with the seeds they don't use. These seeds fall into two categories... seeds leftover because we didn't need all the seeds in the packet, and seeds that are still in unopened packets.

In the past I tossed my leftover seeds and seed packets into a drawer, and then when that drawer got too full to close all the way, I put them in a nice big plastic storage bin. 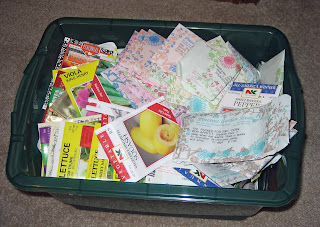 When I look at this full bin, which holds the equivalent of 18 quarts, I think "how did it get so full?"

I think I need a bigger bin.

No, actually, I need a better "seed managament system". I'm good about limiting the number of seed catalogs I order from, and interpreting what is in the catalogs. I'm apparently not so good at seed management once I have the seeds.

If these seeds were anything else, something inert like maybe some scrapbooking paper, I would vow to not buy any more until I had used up all that I had.

But seeds are not inert matter like paper. Seeds are tiny embryonic plants with a bit of food stored with them to get them off to a good start, covered over by some kind of coat to protect them. They don't remain viable forever and some of the seeds in this bin are ten years old.

I suppose I could test some of them to determine the germination percentages, but to do that, I'd need about ten seeds of a given variety, and most of these packets have been opened and may contain fewer than ten seeds.

Now don't make me prove that most of the packets have been opened and a lot of them are actually empty. Just take my word for it. Would I buy a packet of seed and then never use it? Well, there might be one or two or so that haven't been opened, but not many, no more than ten or twenty packets. But keep in mind there are hundreds of seed packets in that bin, so the percentage that were never opened is very, very small.

I really have no idea why I started saving all these seed packets. But now that I have them, they are kind of fun to look through occasionally, so I don't plan to throw them out.

I do plan to do a better job of managing any new seeds I get from this year forward.

- When I have leftover seeds that I am sure I won't use, I will give them to other gardeners who might like to try some seed sowing or would just like to try a variety that I have. (But I'll keep the packets.)

- When I have enough leftover seeds of a particular variety that I think I will plant again next year, I will store them properly in a dark, cool place to maintain some level of viability and then test the germination percentage the following year before I order more seed.

- I will carefully scrutinize my seed order to make sure I really am going to sow all the seeds I buy.

By the way, I don't save ALL the seed packets I get. I actually use some of them as markers in the garden and after a summer in the heat and rain, there's not much left of them to save. But clearly I save quite a few.
seeds