Waiting at May Dreams Gardens

January 06, 2008
Gardening involves a lot of waiting, especially in the wintertime. I'm good at waiting!

I am waiting for my hyacinths to sprout and bloom. 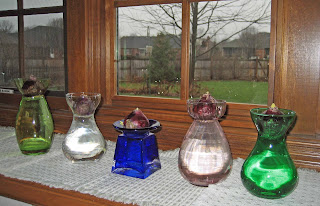 I keep the bulbs in the back of the refrigerator from the time I buy them in the fall until the first of the year. Then I get them out and put them in hyacinth vases for forcing with just enough water so that the base of the bulb barely touches the water. (For my younger sister, the base is the flat part of the bulb).

I have fewer bulbs this year than last year. I could say that I did that deliberately to have more of an "understated display" but the real reason is that some of the bulbs molded in storage. I should have checked on them earlier.

I'm waiting for the first crocus leaves to show up. 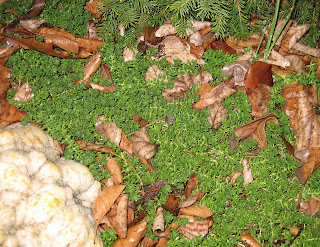 Most years, this is the spot where I'll see the first crocus. It's a little microclimate of warmth by my front porch step. Last year, I spotted the first crocus in late January and I am expecting it will be around the same time this year.

I call that rock on the lower left in the picture my "brain rock" because it looks kind of like petrified brains. Sometimes I act like my brain has petrified, but hopefully only when no one is looking.

I'm waiting for the gardener to weed out this henbit in the vegetable garden. 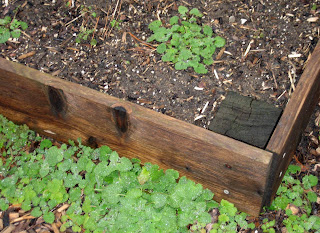 Wait, I am the gardener here. Dang, if it hadn't been all drizzly and wet out, I would have done it today since it was pretty nice otherwise with temperatures in the 60's. That's a very pleasant temperature for working outside in the garden in the winter, and unexpected in January.

I'm waiting for some more compost.

Since I ascribe to the "just heap it on the pile and eventually compost happens" school of composting, I won't get much compost from these piles until next fall.

I'm also waiting for the garden fairies to show up in their special garden of miniature plants which are all dormant now. 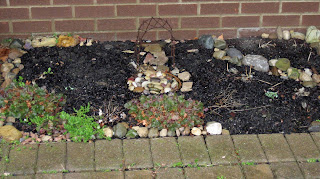 Did you see what those garden fairies did to me yesterday? They took over my blog! I'm going to be more careful from now on and not leave my laptop turned on when I'm away from it.

Waiting. Sometimes that's what gardening is. A lot of waiting. Waiting for something to happen.

What are you waiting for?
gardening