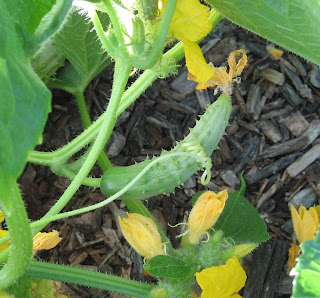 Don’t even ask me if you can have some of my homegrown cucumbers.

If you’ve read about my summer squash and peppers, you might get the impression that I garden just so that I can give away the produce. I do give away a lot of my harvest, but no one gets any cucumbers until I have had my fill of them, and it takes me awhile to get tired of cucumbers, especially homegrown cucumbers.

I know some people who say they can’t eat cucumbers because it causes them some sort of “gastric distress” or excessive burping. That’s caused by a compound called cucurbitacin. If you are one of those people, life is too short to not enjoy eating homegrown cucumbers, so you should look for so-called “burpless” varieties of cucumbers which contain less of this compound. Then if you occasionally belch after eating them, just say “excuse me” and continue to enjoy your cucumbers.

Or do what I do and peel the outer skin off your cucumbers and then eat them.

This year, as in past years, I’m going to grow a smaller pickling type cucumber but I don’t plan to make pickles. I’ll just eat them for snacks. I've chosen a new variety called 'Homemade Pickles' to try.

Both of these are ‘bush’ or short vine cucumbers, which are smaller plants, growing more like zucchini squash, so they are easier to grow in smaller gardens. There are also vining cucumbers, often referred to as long vines, which are good to grow if you happen to have a sturdy fence for them to grow on.

Just writing this post, I’ve made myself crave a good homegrown cucumber. Dang! I told myself I was going to be strong these last few weeks of winter. Store bought just won’t do. I need some fresh produce. I need a gardening fix. Hurry up, spring and summer! I’m hungry for real cucumbers!
vegetable garden