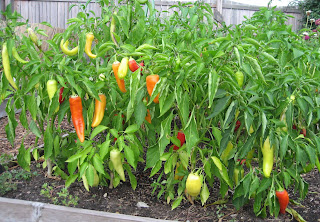 In spite of evidence to the contrary from this picture, I did not have a good “pepper” year in 2007.

It started out quite well, with several varieties of peppers that I started from seed. For bell peppers I had “Orange Sun Sweet’, ‘Red Beauty Sweet’ and ‘Big Bertha’. I have to have ‘Big Bertha’ no matter what. She’s like the matriarch of my vegetable garden; I can just imagine what type of woman this bell pepper might have been named for, if indeed there was a Bertha behind this bell. My other sweet pepper was the ‘Yellow Banana’.

All was going quite well with my seedlings and toward the later part of May, I planted the peppers out in the garden, all in one bed, lined up side by side in straight rows, evenly spaced. It was pepper perfection, a precise parade formation of peppers.

Then one day I went out to the garden to discover that a rabbit or some rabbits had bitten off six or more of the pepper plants. Queue up the horror music! And they left the uneaten stems lying in the garden! My raised bed of pepper perfection was a mess.

Long story, longer, I planted the replacement peppers and then sprinkled cayenne pepper on all the plants. This seemed to keep the rabbits away until the plants grew enough that they could withstand some rabbit nibbling on the side branches.

But the order in the pepper bed could not really be stored. I didn’t put labels in quite the way I should have to know which plant was which and as some of the peppers matured, I didn’t know which varieties they were, so I didn’t feel quite right giving them away. Plus, with the ‘near draught’, the overall crop was just so-so.

Many of the peppers ended up in the compost bin after the first frost. I know. You don’t need to scold me. I felt bad about that. I know that when you grow food like that, you should either eat it or give it away.

But this year is a new year, a fresh start, and I’m very hopeful again about growing some good peppers. I will sprinkle cayenne pepper on them right from the beginning (I get the big containers of it from the local wholesale club store) and I won’t be trying to grow them all lined up in one bed. I’m going to spread them around the garden.

The varieties I’ve chosen, all from Pinetree Garden Seeds, include:

There are dozens of good varieties of peppers available, so I wonder if my list is too short, and maybe there are some really good peppers I should be trying? I probably have room for a few more varieties.

(Did I mention that I myself don’t eat peppers that much? I don’t mind them chopped up and cooked into food for flavor, but to eat one raw or even grilled, I don’t really like them. But I still like to grow them and give them away.)