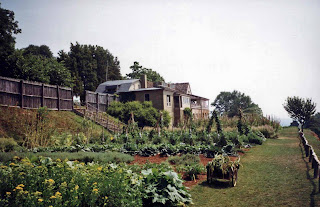 But many presidents have aspired to be gardeners and farmers, to tend the land, including George Washington and Thomas Jefferson, who were both gentleman farmers and gardeners after serving as president. And we are fortunate that today we can visit their restored gardens, Mount Vernon and Monticello.

Several years ago, on my way through Virginia, a friend and I stopped for the night in Charlottesville and I realized the next morning that we were just two miles from Monticello, Thomas Jefferson’s home and gardens.

I was particularly impressed by the vegetable garden, pictured above, all 1,000 linear feet of it, covering nearly two acres. Who wouldn’t be? My own little garden seems so humble in comparison, like a pebble on a beach compared to a majestic mountain.

I was struck by not just the size of the vegetable garden, but the beauty of it. The rows of vegetables form a pattern across the terraced land, nearly as far as you can see. It’s a wonderful tapestry of vegetables of all shapes, sizes, and colors.

I don’t understand gardeners who shun vegetable gardens as common or ugly or not befitting their “landscape” or who look down on those of us who do eat what we grow.

To me, a well laid out vegetable garden is as pretty a garden as one could ever hope to have.

"No occupation is so delightful to me as the culture of the earth, no culture comparable to that of the garden ... But though an old man, I am but a young gardener." - Thomas Jefferson, Garden Book, 1811