Put In Your Requests Now For Some of My Zucchini 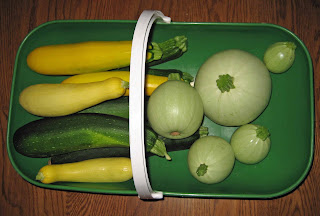 Nearly every day last summer from July 1 until almost Labor Day, I picked at least one or more zucchini squash. I had piles of them on the kitchen table and took bags of them into work.

"Would you like some zucchini?" was my morning greeting to my co-workers. Not "good morning", not "How are you today". It was all about getting people to take some zucchini. It got to the point where people would see me coming with my bags of zucchini and walk away from me, fast.

So I made a mental note that this year I should maybe not plant eight hills of squash.

But you know how it is with mental notes. They are soon conveniently forgotten. At least I forgot that I had planned to plant less zucchini when I ordered my seeds a few weeks ago.

For the 2008 garden, I'm going to plant 'Cue Ball' again. I grew these round zucchini last year for the first time, and loved them. They grow quickly and as noted in the seed catalog, you can harvest a squash or two or six almost daily. I don't know how the plant produces fruit that fast, but it does.

I'll also plant the 'traditional' shaped zucchini; 'Ambassador' for green, and 'Gold Rush' for yellow. These should start producing about two weeks after I harvest the first 'Cue Ball' zucchini.

And because 'Cue Ball' was so good last year, I decided to also try 'Eight Ball', another round squash.

Lest you think I'm out of control with squash, please know that I did decide not to plant 'Gold Bar' again. It was a good squash but I had to drop one of the varieties to make room for 'Eight Ball'.

So doing the math... last year I planted four varieties, I'm dropping one this year, then adding a new one, so that means I'm cutting back to... four varieties. I'll plant two hills of each variety, so that makes eight hills of squash which means...

Put in your requests now for some of my zucchini, I should have plenty of it this summer.

Though I'm pretty much set with my zucchini varieties for this summer, if you have another variety you'd like to recommend, let me know. I can always adjust my plan and plant one or two more hills of zucchini, and then blame whoever convinces me to try another variety for any excess I have.
vegetable garden