Yesterday was sunny and relatively warm with temperatures hovering around 40 F degrees, so I decided to spend an hour or so outside in the garden, puttering around and doing some light pruning.

With some trepidation I slipped on a pair of my ‘gardening jeans’, jeans that I had promoted from everyday wear to gardening wear. I was concerned that between the effects of GRTH (Gardener’s Reduced Time with Horticulture) and the gravitational forces in my closet drawing the threads closer together, that the jeans might not fit.

So I grabbed my pruners and holster and headed out to see what I could do in an hour or so in the garden.

I decided to trim back the grape vines. 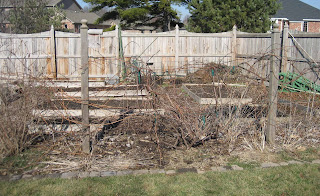 I hadn’t pruned these vines since a few years ago when they were knocked back by a late frost, so they were a bit out of control. I did pause for a moment to think “how should these vines be pruned and is this the right time to prune them?”

Then I just started pruning. My first order of business was to cut them back away from a little Korean Spice Viburnum (Viburnum carlesii) next to the arbor, and then I cut anything that looked like it might be dead. In the process I did confirm that one of the grape vines, a variety called ‘Himrod’ which is supposed to be good for just eating, was dead, so I cut that all out.

Then I stood back and wondered how to prune the rest of the 'Concord' grape vine. I thought about going inside to look up how to prune the grapes, but decided to just go for it. I happily pruned it back and left some main stems.

Time ran out before I could deal with the pile of brush I created, so I left that for later. Some other nice day, I’ll get out my chipper shredder and chop it all up for mulch.

Later in the evening, I did some online research on how to prune grapes, to see if I had really done a hack job on the grapes or if I’d done alright.

Here’s what I found in a Purdue extension brochure on Growing Grapes in Indiana:

"An average mature grapevine will have 200 to 300 buds capable of producing fruit. If all buds were retained the result would be a large crop that would not ripen properly, reduced vine vigor, and poor cane maturation. To avoid this situation researchers have developed a method of pruning to balance the fruit productivity and vegetative growth which will give maximum yields without reducing vine vigor or wood maturity. This procedure is called “balanced pruning”. The number of buds retained is balanced to match the vigor of the vine. The term used to describe vine vigor is “vine size”, which is determined as the weight of one-year-old cane prunings

To balance prune a grapevine, estimate the vine size, then prune the vine, leaving enough extra buds to provide a margin of error, usually 70 to 100 buds total. Next, weigh the one-year-old cane prunings with a small spring scale. Then use the pruning formula to determine the number of buds to retain per vine (See Table 2). For ‘Concord’ vines the pruning formula is 30+10. This means that a vine that produces three pounds of cane prunings would require 30 buds for the first pound of prunings plus ten buds for each additional pound for a total of 50 buds. After determining the appropriate number of buds to retain, prune the extra buds off, taking care to space the fruiting buds evenly along the trellis."

Now, admittedly, these instructions are for commercial growers, but still, does it have to be that complicated?

I think my hack job will be good enough. 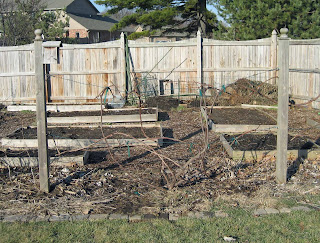 We’ll see in a few months if I inadvertently removed all the fruiting buds. I sure hope not, because I want to make some more grape jam in August.

Oh, and while I was out puttering around in the garden, I ran across my tiny little patch of crocuses, also enjoying the sunny day. 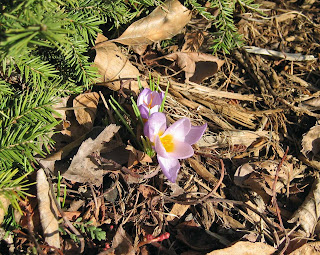 I knew you would not want to miss seeing them, too! They are simple and uncomplicated and remind us of why we garden.
bulbs fruits gardening pruning