What's Not Growing In Your Vegetable Garden? 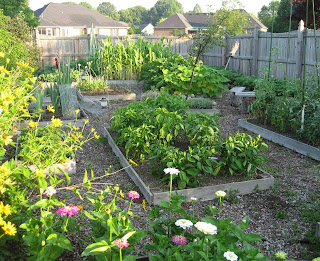 If you were to visit my vegetable garden this summer, there are some vegetables you wouldn’t find because I don’t grow them. You might not notice at first that these vegetables aren’t there because my garden will look fully planted. But later you might think about it and realize I don’t grow some commonly grown vegetables.

So since it isn’t always easy to determine what’s missing when you see something like a vegetable garden, I’ll provide you with a list of what I don’t grow in my garden.

Broccoli – I like broccoli, but don’t grow it because no matter what I do, I always end up with little green worms in the broccoli heads. These are the larvae stage of the imported cabbage looper, a pretty little white butterfly that I often see flitting about in my garden in the early summer. Go away, little butterfly, there’s no broccoli at May Dreams Gardens for you to lay your eggs on, eggs that hatch into little green worms.

Oh, yes, I know that an occasional green worm in the broccoli won’t hurt me. Some say it’s just some extra protein and many people knowingly eat insects. I quote, “Entomophagy (the eating of insects) has yet to become a day-to-day activity for most people in the United States and Europe in spite of the superior nutritional content of edible insects compared to other animals.” (source)

I expect that sometime in my lifetime, we’ll be eating insects regularly, but I’m not ready for that right now. I don’t actually have a fear of eating insects, which I assume would be called entomophagyphobia, I just prefer not to have them mixed in with my broccoli.

Cabbage – It is not so much the worms in the cabbage that bug me, though I usually ended up with some worm damage when I grew cabbage, it is that cabbage is a bigger plant than most people realize. It has all those big outer leaves that are usually cut off and composted when you harvest the actual cabbage head, so it takes a lot more room to grow. Plus, I don’t think the taste of homegrown cabbage is much different than store bought cabbage, so why use up good garden space growing it?

Potatoes – This is another crop from the nightshade or Solanaceae family so if I grew it, I would have to figure out how to rotate its location each year so that it doesn’t grow where tomatoes, peppers, or eggplant grew the year before. Plus, like cabbage, I don’t think homegrown potatoes taste much different than good store bought potatoes.

I realize there are a lot of other kinds of potatoes besides the “Idaho’s” or “Russets” that are found in the grocery store that other gardeners might try to convince me to grow. Indeed, I might be tempted to grow some of those ‘gourmet’ potatoes. But then I run into a space problem again.

So I’ll continue to buy my potatoes. But I will scrub them nearly bald before I’ll eat the skins. Back in the day, when I was in college, we went on a field trip to a potato farm and observed the whole process from harvesting to final bagging to learn how a potato goes from the ground to the grocery store shelf. Yes, the potatoes were washed three different times, and then air dried and all that. But I would still wash, scrub, any potato before I eat the skin. (Don’t you wish you had taken some classes like that in college where you got to go “out in the field” to places like potato farms?)

Kohlrabi – Another member of the Crucifereae family, like cabbage and broccoli, so I assumed I would have worm problems, but I will admit that I’ve never actually grown these in my garden. My Dad grew them and ate them, but now that I am remembering, I don’t think I ever even tasted kohlrabi. I might have to rethink this one and grow it in my garden at least once.

Swiss Chard – No excuse here except I’ve never grown it and I’m not sure how to fix it to eat if I did. I looked it up and it is supposed to be a very healthy food to eat, packed with vitamins and fiber and all that. I could be talked into planting swiss chard if someone with experience growing it gave me a few tips.

Pumpkins and other winter squashes – This is purely a space issue for me. Pumpkins and other kinds of squashes are big plants, many with vines that go everywhere. So if I were to grow them, I’d have to try to grow them vertically, which is a problem if the pumpkin or other squash is of any size. Plus I’m not one to store all kinds of winter squashes in a root cellar and cook them up all winter. I’m not sure I even like winter squash, except for spaghetti squash, and I am finding room for that in my garden.

Lima beans – I don’t like them. Not raw, not cooked, not at all.

Artichokes and Okra – I do like these vegetables, but my growing season isn’t long enough to get a decent harvest from either one.

Rhubarb – This is a perennial vegetable plant and though I admire it as a plant and like to see it in other people’s gardens, I’ve never made room for it in mine. Why? I don’t bake much and that’s what you do with rhubarb, cut the stems and use them for pies. Plus, there are all those warnings about how poisonous the leaves are due to the amount of oxalic acid they contain. Wait, would the leaves be toxic to rabbits? If the answer is yes, and the rabbits would eat them, that would be a reason to grow rhubarb.

Asparagus – Another perennial vegetable. People go on and on about how delicious their asparagus tastes when they harvest those tender shoots in the spring. You can even buy special asparagus knives for cutting them for harvest, and another kind of asparagus knife for peeling off the “tough outer layer at the bottom of the asparagus stalks”. Now, usually I’ll grow something special like this, especially if there is some kind of ritual or special tools involved, but I just don’t like asparagus. So it’s another vegetable you won’t find in my garden.