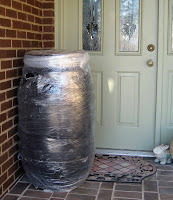 My usual method of making compost is to pile it up in some designated bins in the vegetable garden and let all those micro organisms slowly do their thing.

I don't pay much attention to green material versus brown material. I just throw in whatever I have, including weeds, leaves, rotten vegetables, more weeds, trimmings, weeds, old potting soil, etc.

Then I wait all season until finally in the fall, I harvest the black gold, my own compost.

But I never seem to have enough compost and I only have it in the fall. So I am trying out a compost tumbler to see if I can get more compost faster out of my garden waste.

What does a compost tumbler look like all packed up and ready to ship? As you can see above, it looks pretty much like a 'compost tumbler', if one knows what one looks like. Mine came just as you see it, wrapped up in plastic with a shipping label on it.

I wonder what the delivery person thought was in that package as he or she carried it up to my door? It is an unusual package, but I've had other funny looking packages delivered to my doorstep before, so perhaps they never even gave it a second thought.

This one came from World's Best Organic Compost Tumbler.

Today, I set it up, single-handedly. It was pretty easy to do because I used a socket wrench on the six bolts that are needed to put together the stand and mount the tumbler on the stand.

The most difficult part was actually mounting the tumbler on the stand. I did it by myself and it took a few tries, but with a second person holding the tumbler in place, it would have been easier to do.

Total assembly time for me was about 35 minutes, but again, with a second person helping, it would have taken a little less time.

After I assembled it, I moved it on a flat bed garden cart out to the vegetable garden. 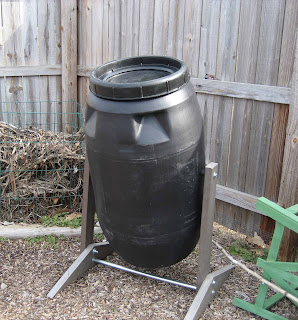 I'm all ready to fill it up and commence to making some compost.

But the instructions say you'll get the best results with a 50/50 mix of green versus brown plant material and by filling it up all at once. Shoot. I won't have enough green plant material until later this month. Then I'll either have to bag the grass the first time I cut it or hope for enough weeds to pull to get the amount of green material I think I'll need to make my first batch of compost. I prefer not to hope for weeds, so I'll use grass clippings.

So, that's why this is "part 1". Watch for "part 2" later this spring when I have enough green plant material to fill my new compost tumbler. Then I'll post "part 3" when I harvest my first batch of tumbled compost.
compost 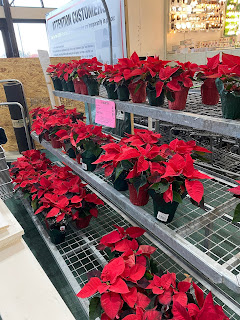