March 24, 2008
I am pleased to host Susan Wittig Albert on her first stop on a blog book tour. See information at the end of this post on how to enter to win a copy of her new book, Nightshade.

A big thanks, Carol, for hosting me here at May Dreams today!

This blog tour celebrates the launch of Nightshade, the sixteenth China Bayles mystery. In case you haven’t met her yet, China is a former criminal defense attorney who has opted for a quieter life as the owner of an herb shop in Pecan Springs, TX. Life in the garden isn’t nearly as peaceful as she expected, however, and China keeps turning up mysteries. In Nightshade, the mystery centers on China’s father, who died in an auto accident 16 years before—and on China’s recently discovered half-brother Miles, who seems to be hiding some shadowy secrets.

Since China is an herbalist, each of her mysteries has a plant theme, and I’ve included a wealth of botanical information into the plot. In China’s new mystery, I chose nightshade as the theme. Today’s post is the first of two posts about the plant family that lends Nightshade its name. You’ll find the second post listed, with the other posts in my blog tour, on this calendar.

The Notorious Nightshades, Part One

Have you ever heard of the nightshades? If you have, you might have a vague idea (or maybe not so vague!) that the plants in this family are notorious for something-or-other. And you’d be right. Over the centuries, the nightshade family (over two thousand species of annuals, perennials, vines, shrubs, and even small trees) has gotten a very bad rap.

But this is a pity, because the nightshades rank high on the list of plants that humans find extremely useful. Did you know that the potato is a nightshade? And what about tomatoes, chile peppers, and eggplants? And maybe you didn’t realize that petunias and nicotiana are both nightshades.

But like any large family, the nightshade clan includes some very bad actors. Tobacco, for instance, the cash crop that has made some people hugely rich and millions of people desperately sick. It’s this side of the Solanum family—the dark side—that has given these herbs such an evil reputation.

Nightshades on Your Table

Let’s start with the good nightshades, the tasty ones. Chances are, you’ll be enjoying at least one of them today: hash-brown potatoes for breakfast, tomatoes in your lunch salad, maybe Eggplant Parmesan or a bowl of chili for dinner. 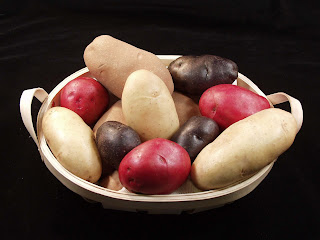 In its native Peru, the potato (Solanum tuberosum) was a staple food and an important medicine for nearly 8,000 years, used to treat everything from arthritis and frostbite to infertility. But when the Spaniards brought the potato to Europe in the 1570s, nobody wanted to touch it. Why? Because a botanist assigned it to the Nightshade family, which made it seem poisonous. The virtues of the potato did not become obvious for another two centuries, when Europeans could finally accept it as a delicious, nutritious vegetable. It was Thomas Jefferson who introduced the potato to polite American society, when he served a platter of elegant, tasteful French fries at a presidential dinner at the White House.

For some serious potato fun, check out the Potato Museum. And if you don’t have enough potato recipes in your collection, go here.

The tomato, valued as both a food and medicine by American Indians, suffered a similar rejection when it arrived in Europe in the sixteenth century. The tomato was said to be unwholesome at best and poisonous at worst, although a few herbalists thought it might be good for the treatment of eye ailments and scabies. The Italians took to the tomato more readily than other peoples, and their sixteenth-century practice of drying the fruit in the sun has come back into favor today. Scientists now tell us that the tomato is not only nutritious, but helps to prevent certain cancers and strengthens the cardiovascular system.

You’ll find a brief history of the tomato here. And for the healing benefits of this popular nightshade, go here

The eggplant (Solanum melongena) is an Asian nightshade that was taken by the Moors to Spain and then to America. In Asia, it is both food and medicine, enjoyed as a vegetable and used as an expectorant, a diuretic, and as a treatment for throat and stomach ailments. In Europe, it was called the “mad apple” (and thought to make you insane) but began appearing as a vegetable in cookbooks in the nineteenth century. Americans called it eggplant because some 18th-century European cultivars bore yellow or white fruits the size of goose or hen's eggs. The Gourmet Sleuth tells you everything you need to know about this love-it-or-hate-it nightshade, and offers a cornucopia of recipes, to boot.


The chile pepper is Texas’ favorite nightshade. Most Texans couldn’t survive a single day without chowing down on at least one chile. But who can stop at just one? For the last word on chiles as both food and medicine, read this highly informative ChileZone page. Be sure and check out the heat ratings (expressed in Scoville Heat Units) of the various kinds of peppers. There’s some good information about the health benefits of chiles on this Whole Foods site. And if it’s recipes you’re after, try the Pepper Fool.

The tomatillo (Physalis ixocarpa), is a lesser-known nightshade that we love, down here in Texas. Sometimes called a “husk tomato,” it is beginning to show up in supermarket produce bins. But it’s as easy to grow as tomatoes. And once you try it, you’ll find all kinds of uses for it.

Gourmet Sleuth gives you some history, lore, and facts about this nightshade, along with grow-your-own instructions and some tasty recipes.

The nightshades are such fascinating plants that I couldn’t begin to tell you all about them in one post. So please join me on April 9, when I’ll blog about some of the ornamental nightshades, as well as the notorious “black sheep” of the nightshade family. I’ll be stopping in today, tomorrow, and Wednesday (March 24, 25, and 26) to answer your questions and reply to your comments. Oh, and thanks again to May Dreams for being such a wonderful host!

About the book drawing and Susan’s blog tour

If you’d like to enter the drawing for a copy of Nightshade go here to register. But you’d better hurry. The drawing for May Dreams closes at noon on March 27, 2008.

Want to read the other posts in Susan’s blog tour? You’ll find a calendar and links here.

If you have any questions for Susan on nightshades, or anything related to China Bayles, please leave a comment. Susan will be checking back over the next few days to review comments and answer questions.

Thanks, Susan, for visiting May Dreams Gardens today!