Rabbit Wars: My Rules of Engagement

March 18, 2008
The hole in my center garden bed appears to be getting bigger, and I still don’t know what or who lives in it.

In an attempt to avoid getting wet, it was raining, I first tried to view the hole from the house using some binoculars, hoping to catch sight of a rabbit burrowed in there attempting to keep dry.

I was unable to view the hole from that far away, so umbrella in hand (remember, it was raining and still is) I went out to the garden to see the hole up close. Once outside, I had a few flashbacks of the last time I was in the garden on a “rabbit errand” holding an umbrella to keep from getting wet. Déjà vu, I’ve done this before! 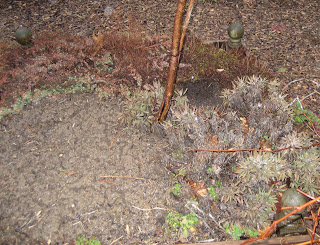 Now where would a rabbit go on a rainy evening like this? I did some cursory checking around the garden and under a few shrubs and found no rabbits.

But is this a rabbit’s warren? There is no fur inside, but the hole is definitely a hole that something dug, and it is getting deeper. I’m guessing that one day I’ll go out there and the hole will be filled with baby bunnies.

Baby bunnies look like little rodents, by the way, because they are rodents. I know. I’ve found some in my garden before, in a lettuce patch, and I know I could find some again. And when I do, I know it will be frustrating and annoying and make me think of doing things I wouldn’t normally do.

Apparently, other gardeners, like Michael Pollan, author of Second Nature: A Gardener’s Education, have done things they normally wouldn’t do when first confronted with wildlife that thinks a vegetable garden is full of food for them. As noted in the chapter “Nature Abhors A Garden”, he actually tried gasoline and fire to rid his garden of woodchucks before he realized that this was not the best way to keep nature out of the garden. He ended up fencing in his garden to keep them out, which is much more civilized.

Fencing is not a good option for me to keep rabbits out of my garden. I have a privacy fence around three sides of the garden, but I don’t want to fence off the fourth side and create a barrier between the rest of the yard and the garden. Plus a fence is expensive.

So to remain sane as I battle the rabbits, I am writing my own rules of engagement for how I will conduct myself in my war on the rabbits. Please let me know if you have any other suggestions.

Use firearms of any kind to shoot the rabbits.

Use fire to burn out the rabbits.

Use poisons to cause the death of the rabbits.

Use traps that when sprung result in the death or injury of the rabbits.

So far, it seems like I am giving all the advantage to the rabbits!

Use deterrents, primarily cayenne pepper, to keep the rabbits from eating from the garden.

Chase after any rabbit that I find in the garden.

Use a live trap to capture rabbits and then release them someplace safe, like in my sister’s yard.

Use row covers on my garden beds for as long as I can to hide the produce from the rabbits.

Allow the neighbor’s cat to roam around the garden, as long as there is evidence that he is keeping the rabbits out.

I will keep my dignity at all times, conducting myself in a civil, rational manner throughout any battle with the rabbits.

This is my post for the Garden Bloggers’ Book Club, February-March virtual meeting. I have to confess that I have not finished the book, Second Nature, and probably won’t be able to by the end of the month. So I am choosing option three, to post something related to the book.

It’s easy to join in this virtual book club. There are three options:

Read the current book selection, Second Nature: A Gardener’s Education by Michael Pollan, and post something about it on your blog.

Post a review of any book written by Pollan.

Post on any idea related to the topic of the book. That’s what I did.

Once you’ve posted, let me know via an email or comment, and then I’ll include a link to your post on the virtual meeting post on March 31st.