Slow Spring - I Have Proof 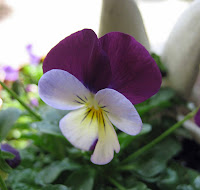 Spring is slow to arrive this year, and I have proof.

In 2002, I had daffodils blooming here at May Dreams Gardens on March 14th.

In 2006, I wrote in my garden journal that many daffodils had buds on March 15th, I assumed they bloomed shortly afterwards.

In 2004, the first daffodils were blooming on March 19th.

In 2003, I don’t know. I can’t find references in my garden journal about when the daffodils bloomed that year, but I did note on one day in March that the rabbits were eating the leaves of the Hellebores. Go figure.

Which brings us to 2008. Here it is March 28th, and no daffodils are yet blooming. 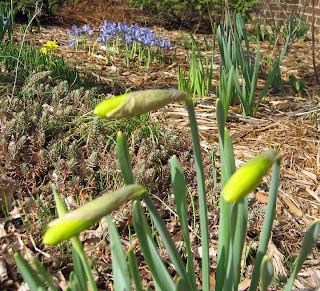 There are buds, but no blooms. I am hopeful that tomorrow’s predicted sunshine and warmer temperatures will coax these daffodils to bloom.

I will accept this slow spring if once it warms up, it stays warmed up. I do not want another spring like last year. That was an awful experience. As was the dry summer. And the time I got stung by a German yellow jacket. And the other time I got stung.

But I don’t talk about those 'less than positive experiences of gardening' especially with ‘those who don’t garden’. They wouldn’t understand, would they? They would not understand this compulsion to garden and what gardeners go through some years.