Tales from the Rabbit Wars 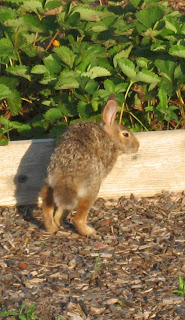 Gather round, all ye gardeners young and old, to hear some tales from Rabbit Wars of past years.

I don’t remember too many skirmishes at other places where I’ve gardened, but there have been plenty of battles with rabbits here at May Dreams Gardens.

There was the great rabbit escape of last summer. Oh, yes, that was the day I stood in the rain in my garden, holding that rabbit caught in the trap, singing my victory song. And then the rabbit shot out of that trap like a shot from a cannon! I’ll never forgive that rabbit for leaving me standing there looking like a fool, a wet fool, holding that empty trap.

When I was finished, my garden looked absolutely ridiculous and that fencing made it very difficult to get into each bed to actually garden. But I put that all out of my mind. It would be worth it to keep the rabbits out.

Then one day I went out to the garden and noticed that something, a rabbit, had been eating all my green bean plants, leaving behind little nubby stems. How did those rabbits get in through my fencing?

They chewed little doors in the fencing, that’s how.

When I saw those “doors” and “windows” and other openings in that ridiculous fencing, I ripped it all down, sent a letter to the manufacturer, and got my money back.

The next year, I stretched some chicken wire fencing across the entrance to the garden. With that fence and the privacy fence around the other three sides of the garden, I thought for sure I had won the Rabbit Wars, finally. And for good measure and just to be sure, I cut strips of hardware cloth and stapled them along the bottom of the privacy fence and then pinned the strips to the ground with landscape staples. There was no way a rabbit was going to get to my green beans!

Then one day I came home and there was a rabbit in the garden eating the green beans. Furious, I climbed over the chicken wire fence and chased the rabbit around the garden. That rabbit was in such a panic that with one flying leap it jumped over my three foot tall fence.

So I took that fence down, too.

But I still did not wave the white flag of surrender and go down in defeat!

I came up with a new plan, a new attitude, a new campaign against the rabbits last year. And though I had some set backs in the continuing Rabbit Wars with my new methods I had some success, too, so I’ll be using this method again this year.

It doesn’t involve using stuff that grosses me out. I don’t plan to get fox urine, coyete urine, my urine or human hair to put around the garden. After all, this is my Vegetable Garden, where I grow food to eat.

It doesn’t involve “wishing the rabbits away.” I know from experience that wishful thinking doesn’t work either. I’ve tried that, believe you me, and it was the least effective method.

What seems to work for me is to cover young plants with row covers and sprinkle cayenne pepper around and on plants like tomatoes and peppers. So I’ll try that again this year.

And I am also hoping that now that I have adopted some rules of engagement and given the rabbits their rules to follow for all future Rabbit Wars, it will be different this year and we will be able to live in harmony.

Let there be peace at May Dreams Gardens!
rabbits vegetable garden