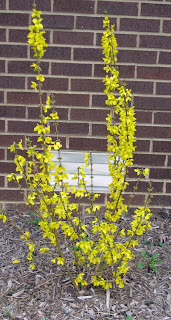 I have news to report on the flowers this year.

All the Forsythia are still in full bloom, including my new one, 'Show Off', planted last fall. Last year by mid-April, they were finished blooming.

'Show Off' isn't very big yet, but I can tell already that it is a bloomer, as advertised. In a few more years, when it gets a little bigger, it will be a stunning blooming shrub. And guess where it is planted?

Over on the utility side of the house. It won't be that viewable from the street, but it will probably glow and be viewable from airplanes passing overhead.

The violets are starting to bloom. 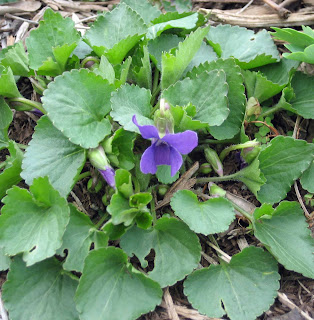 Last year we had near record cold weather in early April which stopped the violets from blooming early and froze out quite a few other blooms. Some gardeners consider these weeds, but I don't. I let them grow here and there and wherever they want, within reason. 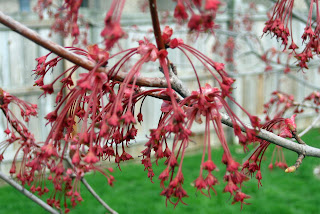 By this time last year, the bloom on the red maple had long faded, and the red bud (Cercis canadensis) had already finished blooming, too. But this year the red bud is just starting to bud out, so I didn't take a picture of it for today's post.

Closer to the ground, patches of Grape Hyacinth (Muscari sp.) seem to be about on schedule. 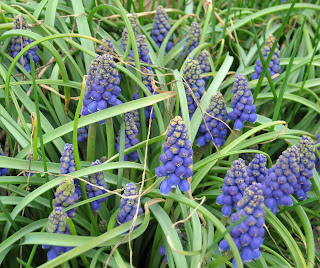 But the tulips are far, far behind last year and are just starting to show some buds, whereas last year in mid April they were in full bloom. 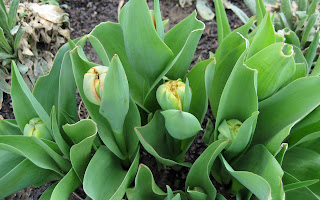 Did you notice that someone, let's call him Mr. Rabbit, has been eating the foliage on the tulips?

But even though many flowers that would normally be blooming now aren't yet blooming, I can still rely on the Helleborus to put on a nice show in early spring. 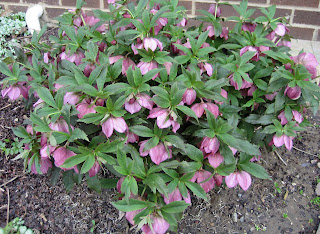 These blooms will hang on for quite a while. I think it is a good year for hellebores, overall, and this is the best this one has ever looked.

In some ways, a slower spring is nice for a change. Everything will bloom in its time, and there is going to be more time to enjoy the later blooms that are taking their sweet time.

And as the weather turns warmer, I can watch to see if the blooms catch up.

Here is a list of blooms in my garden today.

What's blooming in your garden today? Are your blooms early or late this year?

Join us for Garden Bloggers’ Bloom Day by posting pictures on your blog or even just writing about what's blooming in your garden today. Then leave a comment here so we can find you, visit your blog, and make a fuss over your flowers. And if you don't have a blog or the time to write a post, leave your list in a comment here. All are welcome and encouraged to participate!

“We can have flowers nearly every month of the year.” – Elizabeth Lawrence
garden bloggers bloom day