Never Thought It Would Be This!

April 01, 2008
Earlier this year, I was out in the garden and noticed a trail in the lawn. I posted a picture of it, and even came up with several ideas of what it could be. Was it a migratory path for snakes, a new tiny fault line or just a path created by water run-off? After all the comments, I decided it was most likely where some voles had tunneled under the lawn, even though I didn’t want it to be that. Voles can be so destructive.

Well, it turns out it isn’t a vole trail, either.

I can hardly believe what it turns out it is, or more correctly, what it has revealed.

You see, over the last several weeks, that little crack has gotten a bit wider and I’ve gotten a bit more curious. One day, just to see how deep the crack was, I stuck a yard stick in it and almost lost my grip on it, as I was able to push the yard stick all the way down into the crack. That’s 36 inches!

Having some concern that this crack would impact the foundation of my house, I called a friend of mine to come over and check it out. He couldn’t believe it either.

To make a long story short, through a series of calls and visits from various experts and others, we’ve determined that under that part of my yard there is…

It seems almost like it couldn't be true, so let me provide a little more background.

When I bought my lot to build on, there was a very large, old Sycamore tree near where this crack showed up. I spent a few weeks deciding if I should cut down the tree or build around it. Finally, after consulting an arborist who seemed to view this as a great money-making venture for himself, I decided the tree was too old and unstable to keep. Plus the tree was going to end up being about ten feet from the corner of the house, so if it fell the wrong way in a storm, it would probably wipe out my sunroom.

It took three days for a crew to first cut the tree down, then cut it up, then haul it off. The tree turned out to be about 90 feet tall, six feet in diameter and completely hollow inside. I still believe it was the right decision to have the tree removed.

But I always felt bad about cutting down that tree, thinking about what history it had witnessed, and about how it was probably old enough for Indians to sit under it on a large boulder that used to be there, back when Indians lived in this area.

I thought of that history when I once found a molded piece of rock that looks like it is shaped like a bird buried in the ground near where that tree had stood offering shade for all those years. 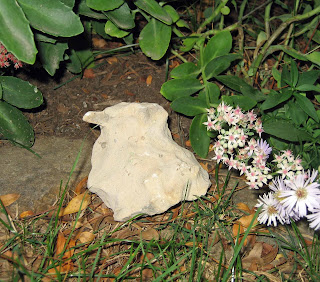 Was this rock an Indian child’s toy?

And now this! An underground cavern filled with Indian artifacts.

I was asked by the authorities not to say too much about this, but they agreed I could put information on my blog starting April 1st as long as I didn't include pictures. That's when they'll be ready with their own press releases.

They say it is up to me to decide if I should allow archaeologists to come dig for the Indian artifacts or just leave it alone. If they dig it up, I’m likely to lose that whole section of garden for several years and will have people in my back yard digging for quite a while.

They also all agree that the crack is stable and isn’t likely to get any bigger. In fact, they think it could disappear at times and reappear at times, depending on the weather and all. So it is really my choice on whether or not to allow for further exploration.

It’s a lot to ponder on today. What would you do?
humor