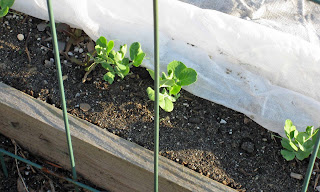 The peas have sprouted in the garden, along with all the other early spring vegetables I sowed back on March 16th. The vegetable garden is right on schedule after one month. 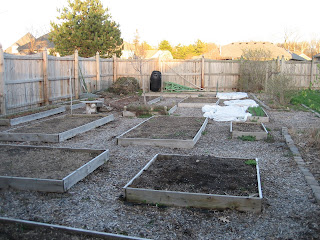 The onions are that little sliver of green in the first bed that is covered. Fortunately, rabbits don't like onions, so they are safe to leave in the open.

Further back, you can see the new compost tumbler. I've been turning it every few days and tonight I opened it up to see what was going on inside.

Composting was going on inside it. It was hot in there, hotter than the open compost piles next to it.

Elsewhere in the garden, Mr. Rabbit was enjoying the lovely evening.

I think he looks kind of fat, or does the camera just make everyone look heavier? Where has he been eating? What has he been eating? I'd like to live in a state of denial and think that he is eating at the neighbor's and just coming here to May Dreams Gardens to smell the flowers.

On the right in that picture you can see that the lilac is leafing out quite nicely. I believe and predict that this is going to be an outstanding year for lilac blooms, as long as we don't have any days like last April when it was cold, below freezing night after night.

On the left, barely visible, is a Viburnum which has not leafed out at all. Sometimes as soon as people see one shrub leaf out, they assume any other shrub that hasn't leafed out is dead. Not true!

Each shrub 'breaks dormancy' in its own time. If you think a shrub is dead and not dormant, try to bend a branch and if it snaps and is all dry, it's probably dead. If it bends without breaking, it is probably just not ready to leaf out yet.

Gardeners have to be patient. We might think spring is all frantic and hurry up, especially when we start to see leaves and lilac buds, but really, a lot of it is slow and steady.

I'll remind myself of that as I start running around here at May Dreams Gardens like the proverbial chicken with its head cut off, thinking of everything I want to do right now, suffering from an acute attack of GADS.
vegetable garden