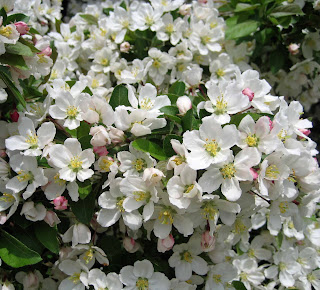 What a difference a year can make in a garden and in a life.

Last year, this crabapple, Malus
'Guinevere' got frozen out and bloomed rather pathetically, almost painfully.

This year, she is back to her full glory and then some.

According to my records, she (it is okay to refer to a tree called Guinevere as a 'she') is blooming about a week later than normal, but that seems to be the case with other flowering trees and shrubs around here.

I took a lot of pictures of this crabapple today, but I'll spare you seeing all of them and just show you one more. 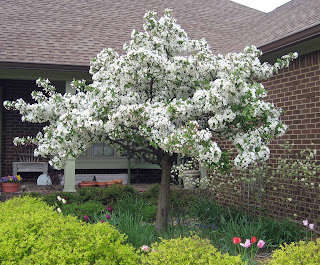 Temperatures are supposed to drop over the next several days, but hopefully not to the point that we see heavy frost and a quick end to these flowers. 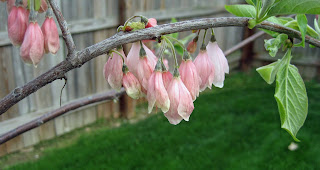 This is one of the trees I said I would include on a Gardener's Life List of plants I want to have bloom in my garden. This tree, which I planted last fall, had more blooms than I expected, and I can just imagine it will get prettier every year as it continues to grow.

Do you think it clashes with this Redbud (Cercis canadensis) planted about 20 feet away and blooming at the same time? 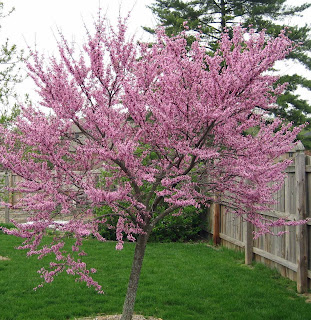 No? Good, because I am keeping both of these trees for as long as they live.

This weekend almost felt like a "bonus" weekend, with several nice surprises.

Forecasts called for a cold, rainy weekend, or at least rain on Sunday. The forecasts seemed to be all wrong and so, since I believed what the weathermen said, the weather turned out to be a nice surprise. We didn't get any rain and the high temperature each day was in the 60's, so it was wonderful weather to work in the garden. I did some weeding, some trimming, and some mowing and cleaned up the garage in preparation for some time off in May to work in the garden.

The other nice surprise this weekend was to see my name in an article in the Austin Statesman about the Garden Bloggers' Spring Fling earlier this month. The article mentions that I live in rural Indiana, which isn't exactly right, though there is a pasture with horses grazing in it at the end of my street where it dead ends. 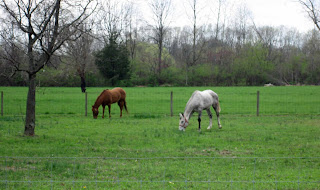 And I was also referred to as a 'rock star' in the article.
Hey, is it okay to add stuff to your Gardener's Life List that has already happened just so you can cross it off? "Get called a rock star at the spring fling". If it is, then, "check and done"! (Who else adds stuff to their lists after the fact so they can cross them off?)

Seriously, as I noted in a comment on Digging... Rock star? No, I'm just a lucky gardener who loves to garden and write about it and found some kindred spirits on the Internet who love the same things, and then I got to meet some of them in person.

And I am grateful for all the garden bloggers and readers who come back here every day or every week or whenever to read and comment and join in for Garden Bloggers' Bloom Day, the virtual book club, and soon the Garden Bloggers' Hoe Down.

Thank you all!
Blogging trees