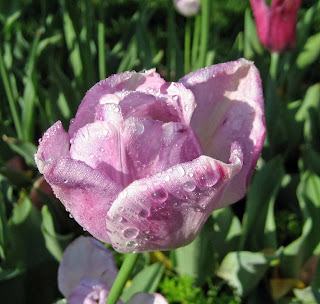 Today marked 30 days since I filled up the compost tumbler with henbit and other garden refuse.

Faithfully I turned the compost tumbler a few turns every day every few days when I was in the garden and thought about doing it.

A couple of times I peaked inside to see what was going on.

For my efforts, which involved setting the compost tumbler up and loading it with garden refuse, and then turning it when I thought about it, I got this nice wheelbarrow full of compost. 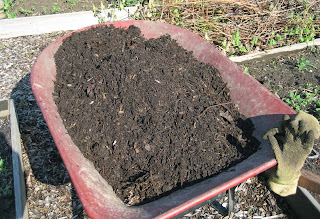 And this second wheelbarrow full of compost. 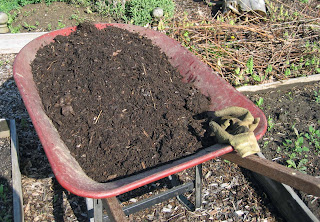 And this third partially full wheelbarrow of compost. 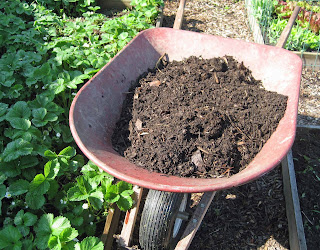 In the same amount of time, my traditional compost bin gave me nothing. 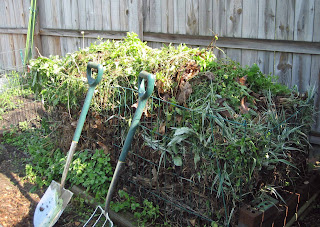 I'm convinced. The compost tumbler from World's Best Organic Compost Tumblers is a great addition to the garden. Thank you, Chris, for sending me this one to try out.

Truth be told, I could have harvested this compost a week or so earlier, I just didn't have time to do so. But I wish I had because then I'd be well on my way to getting another load of compost. Love the compost! Can't get enough of it, can we?

And I know I whined in a previous post that the compost tumbler was all black and ugly, but now I don't even mind that so much, since I got some great compost out of it for not much effort.

But I did find a better place to put it, where it will be mosly hidden from view, behind this Snowball Bush, next to the strawberry bed. 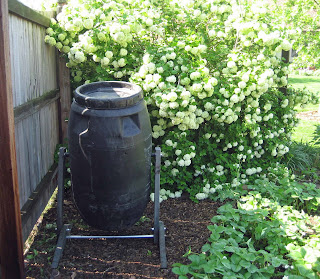 You can't even see it from the patio. 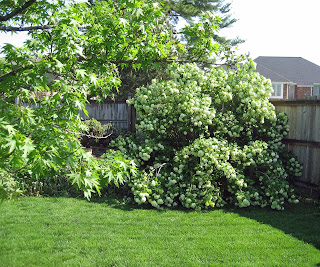 But even if I didn't have a place to tuck it away out of site, I'd still want it, because my, that was some nice compost. I want more!
compost

Robin's Nesting Place said…
That is beautiful compost, Carol! That works so much quicker than the trash cans I'm using. I haven't turned mine and I don't think it gets hot enough on the side of the house.

Whyite said…
Quite a bit of fluffy compost there Carol. The stuff Gardeners love to dream about when not dreaming of more beds of flowers and veggies.
Sun May 11, 12:13:00 AM 2008

Gail said…
Wow! I am so very glad to read this! Turning the compost was not easy with the composter we got dirt cheap (dirt is not cheap anymore) from our local municipality.

Muum said…
I was talking about a compost turner with my son yesterday. My kids and kids-in-law came over to help out with the yard(my birthday gift- free labor!) . He is very good about helping me turn the pile, which I can't do all at once, but he can. He said, 'there must be an easier way to do this' and I explained about these type of composters. maybe I should've asked for one for my b'day ??? ah well!
Sun May 11, 09:47:00 AM 2008

Monica the Garden Faerie said…
Carol, I do like your tumbler! In fact, it gets my mind spinning in Red Green-like directions for building my own such device! You're right in that there never seems to be enough compost. The materials really shrink in volume as they decompose and my flower beds are large and always hungry. I really should add another pallet bin...
~ Monica
Sun May 11, 09:55:00 AM 2008

Stacy said…
Wow, that is great compost! I think my next step is to own a tumbler like that. We did have a homemade bin made out of a trash can with holes drilled in it and it was awkward and a pain in the butt to try and turn. Now we have an actual compost bin that comes in layers that is easier to turn - but I am sure it is not as easy as your turning bin! :) One day i will own one. One day!
Sun May 11, 11:52:00 AM 2008

Anonymous said…
That is great looking compost. The more I read about composting the more I want to try it - have been searching for the perfect composter - thanks for the link!
~plantgirl of
http://squarefootgardenblog.com
Sun May 11, 04:10:00 PM 2008

Barnaby Rudge said…
That is really good compost. I think it'd also be helpful to people if you posted exactly what you put in the tumbler. That is the part people often get hung up on in my experience. What you put in (and perhaps, how large of chunks of stuff you put in) has a big impact in the speed and quality of what you get out.
Sun May 11, 05:42:00 PM 2008

Carol Michel said…
Robin's Nesting Place... One reason this tumbler gets so hot is it is black, so if you were going to use trash cans, I would get as dark a color as I could.

Aimee, it does work remarkably well.

EAL, I think mine has been 'cooking' for longer, plus results will vary depending on what you put in it. Can't wait to see what you harvest out of yours.

Gail, this one is easy to turn.

Muum, maybe next year you could get one for your birthday. My compost piles are not easy to turn, so they never get turned, or rarely get turned.

The Garden Fairie, Yes, we can never seem to get enough compost.

SuzyQ, Yes, one day, maybe you will have a tumbler. I'd be checking Craigslist and other sources, too.

Plantgirl, If you are not already composting, you should start. You can start with a pile, nothing fancy and eventually you will get compost.

Chris, Good point. I loaded up the compost tumbler literally with all the henbit I weeded out, plus a shovelful or so of what was on top of my compost bin. I was not specific about greens and browns, just loaded it up. One thing on the henbit is that with the roots, there was soil attached, and probably some of the mulch in the paths of the garden, so that added to the brown.

My next batch is different, lots more trimmings from perennials, more weeds of different kinds and a few handfuls from the top of the compost bins. I didn't try to chop anything up, so this second batch may take longer.

NatureGirl, Thanks for stopping by and good luck with yor compost.

Lisa at Greenbow, It is a nice addition for me. I'll still have compost bins because I have too much for just the tumbler. Plus, the tumbler works best if it is loaded up at once and then allowed to do its thing.

Lori said…
Oooh, I want one! That's the kind of composting that I can handle, and it looks like the barrel'd fit where I can't grow stuff because of buried cables. Hmm.

Sarah said…
Carol your post inspired me to look inside our compost tumbler, which we'd sort of given up on. Well what do you know? It was filled with lovely dark compost all ready for the garden! We're definitely going to keep up with it now. Thanks!
Sun May 18, 10:02:00 AM 2008

healingmagichands said…
Thanks for this post and the link to it in August. We have been researching compost units and were having a hard time deciding what to get. Because of your experience, and the fact that you went to the trouble to tell the rest of us about it, we will be able to make an informed decision about compost tumblers. By the way, we have decided to buy TWO!
Fri Aug 15, 02:00:00 PM 2008