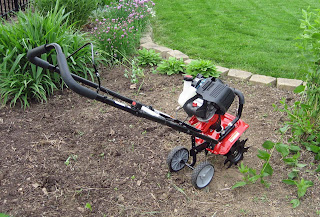 Two of the hardest jobs in the garden are breaking new ground and cultivating existing beds to get them ready for planting. Every gardener seems to be looking for new ways, better ways, to make these jobs a little easier.

I’m fortunate to own a roto-tiller, which did make life easier when I originally dug most of my flower beds and tilled up my vegetable garden every spring, before I switched to raised beds and spring tilling became a part of my past.

I bought the tiller, a Troy-Bilt 3 HP ‘Tuffy’, in the fall of 1992. Such freedom it gave me! It was at the time the smallest tiller they made, but with two extra weights added, it still weighed a whopping 135 pounds. It is about all I can handle in a piece of power equipment.

So I don’t get it out just anytime I want to cultivate the ground. I save it for real honest to goodness ground breaking work. And even though the last real ground breaking work I did was probably eight or nine years ago, I still keep the tiller and start it every once in a while, because someday I might want to dig some more beds.

But the tiller is too big and too heavy to drag out when I just want to cultivate a small area somewhere. For that, something smaller is called for, so I tried out a garden cultivator, compliments of Troy-Bilt.

Here’s my assessment after trying out their 4-Cycle Garden Cultivator, model TB144, in my own garden.

Overall good things about this cultivator:

- It is light enough that I can carry it around easily.
- The handle fold downs, making it easy to store.
- You don’t mix the gas and oil. I hate mixing gas and oil for anything.
- I was able to start it, which isn’t true of many pull start gas engines.

How it worked in my garden:

- It did a good job mixing in compost in an area of my garden that had previously been overgrown with ribbon grass.
- It also did a good job cultivating in the area where I had dug up forsythia, turning up all kinds of small root pieces, so I guess I didn’t get all the roots out of that area.
- It just dug in one place when it came to the raised bed vegetable garden and was hard to move forward. Those beds are never walked on and remain pretty friable, so I suppose cultivating them wasn’t really necessary. I just wanted to try it.
- It didn’t do much when I tried it to ‘break new ground’ in the lawn. Honestly, I don’t think it was designed to do that, so I wasn’t surprised. For future ground breaking I’ll either use my tiller or the lasagna gardening layering method.

- It’s loud. You should definitely wear earplugs when you use it, as should anyone working with you.
- When you start it, with the throttle control held up against the handle, the tines immediately start turning. You can release the throttle control and then the engine is just idling and then the tines aren’t turning. I think it would be safer if there was a way to start it without the tines starting to turn immediately.
- It has two back wheels, but when I tried to pull or push it on the wheels, it seemed off balance and would fall over on its side. I ended up carrying it from place to place.
- It didn't work well for me as an edger. It was easy enough to remove the cultivating tines and switch to the edger attachment but I was not able to control it as I tried to edge along the driveway. It wanted to pull to one side and I ended up with the edger blade skittering across the driveway a couple of times.

Some advice if you use any tiller or cultivator.

- Wear ear plugs.
- Wear heavy shoes, those tines are turning fast. I always wear heavy shoes when I use a roto tiller, and I think that would be the safe thing to do when using a cultivator.
- Wear eye protection. Any cultivator can kick up a rock or other flying debris unexpectedly.
- Concentrate on what you are doing while using it. When a cultivator hits up against something it can’t cultivate, it will “jump” a bit and you have to be ready to keep it from going where you don’t want it to go. The same is true if you are using a roto-tiller.

Troy-Bilt also makes an electric powered cultivator, and you can read a review of it on A Gardener's Notebook. After reading his review, I wonder if I would have preferred the electric model instead of the gas powered model?

If you have any other questions about this cultivator, I’m happy to answer them, just email me at the address on the sidebar or leave a comment.
tools