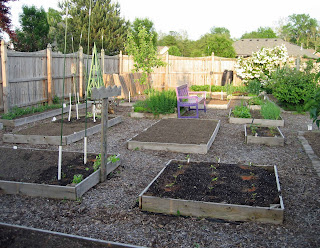 There it is, all planted up, my 21st vegetable garden.

I've learned a lot since I planted my first vegetable garden back in 1987. A lot. But there are times I still feel like there is a lot more to learn.

And there are times when I feel like ignoring what I've learned and trying something different.

This year I went against all I was taught about crop rotation and spread everything throughout the garden. No more do I have a bed of peppers, they are spread out over four different beds. Tomatoes? I have fourteen varieties and I think they are in six different beds. I spread the eggplant out in several beds, too.

And there are squash hills from one end of the garden to the other.

Yes, I know that for crop rotation, this is not good. But I'm doing it anyway. It's too late to stop me or try to talk me out of it. I've planted.

We'll see how it goes. Already I've figured out that this doesn't make it very easy to put row covers over some crops to keep the rabbits out, so instead of doing that, I've sprinkled everthing with ground cayenne pepper.

I'm sure the rabbits were laughing when the wind switched directions on me and I got a face full of that cayenne pepper. My, that does burn your eyes.

What got me really going this morning and out early to finish up the vegetable garden planting was the threat of rain. Turns out, I do better, as do many people, when I feel like there is no more time and IT HAS TO BE DONE. Get out of the way! Grab the hoes and get to gardening! And I did. I worked steadily in the garden for nearly six hours planting vegetables, annuals, perennials and a few shrubs.

I only stopped because we had a brief shower and after looking at the weather radar, I thought the rain might go on for awhile. But it didn't, so I quit unnecessarily before I was done, and I still have a few things to plant after work this week.

In between planting, I took breaks and photographed the peonies. 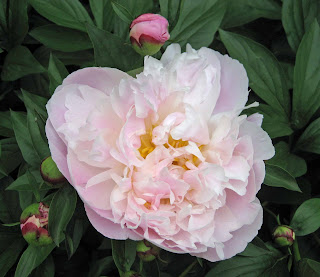 I could have sat there and looked at them all day but I had work to do! No time!

And I could post 50 pictures of them this evening, but you don't have that much time either. Or do you? If you do, let me know, I have dozens of peony pictures I could share.

When I wasn't looking at the peonies, I was very busy in the vegetable garden. I had to pull these 'German Giant' radishes because they had "bolted' and sent up flower stalks. They never did form good roots. 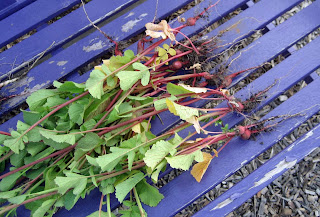 But I don't think it is a problem with this variety, I think I planted them at that wrong time. The moon phase was all wrong for root crops the day I planted them, as it turns out.

Just to see if that was really the reason, I'm going to try sowing seeds for this variety again on a day the almanac says is good for below ground crops, which is the 27th, 28th or 29th of May.

By the way, I didn't pay attention to the almanac when I planted today. The above ground crops should next be planted on June 5th or 6th, according to the almanac, but I didn't want to wait that long. We'll see what happens. If I have total crop failures, at I least have a good excuse.

I am pleased to report that there won't be a crop failure of the strawberries. 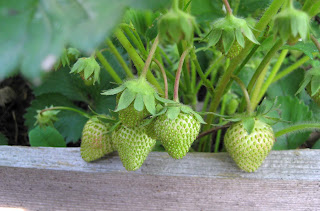 If the bunnies will stop nesting in the strawberries, I think I'll have a bumper crop. I'll have the "good problem" of having too many strawberries. But I'll deal with it. I'm sure I can give some away or learn how to make strawberry jam.

But don't send me those jam recipes just yet, as you know what they say...

"Never count your strawberries before they ripen".
vegetable garden