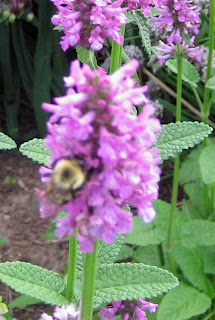 Like all gardeners should, I welcome pollinators to my garden.

The more bees I see around the flowers, the better I feel about the garden, and life in general. I never worry that a bee will sting me, and so far, they haven't.

But I have been stung by relatives of the bees. There was the unfortunate paper wasp incident of 2006 and then the attack of the German yellow jackets last fall.

So, here it is 2008 and I have another stinging insect situation to contend with.

Around a star magnolia planted next to the house on one corner, there seem to be dozens if not hundreds of flying insects with stingers. I've stood from a safe distance watching them, and to me they look like mud daubers. But when I read about mud daubers, they are described as solitary wasps.

So if they are solitary wasps, why would so many of them be flying in and around the star magnolia together?

Maybe they are hornets?

I keep trying to look inside the tree to see if I see a hornet's nest, but so far, I don't see anything like that.

So I've decided the only way to make a positive id and determine if I have a problem, is to capture one of these wasp things so I can take a good look at it, and maybe take it to a county extension agent to look at. All I need is a jar and I know I can reach up and grab one it, just like when I used to catch fireflies as a kid.

But when I mention this plan to others, they admonish me by saying "you'll get stung" or "haven't you been stung enough". Don't they think I've learned my lesson and will be careful?

I even tried to borrow an insect net from my nephews and niece and was informed by my ten year old niece that they didn't have one and they don't try to catch flying insects. Hmmm. Wonder why? I thought for sure I'd given them an insect net once as a gift? Was she deliberately keeping it from me?

But having no net won't stop me. Because I have to walk right by this star magnolia to mow the lawn, I really do want to find out what these wasps are.

At this point, you are probably expecting this post to end with the story of me getting stung trying to get one of these wasp into a jar.

No, I'm fine. It rained this evening so I couldn't go through with my plan. But I have a jar, and I'm just waiting for my opportunity. Wish me luck!
insects