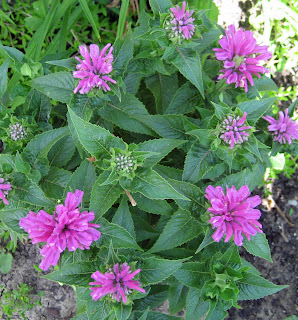 Following a certain self-imposed etiquette of garden blogging, I am putting the picture of the horrifying MAGNOLIA SCALE INFESTATION here at May Dreams Gardens at the end of this post. The picture of these dwarf Monarda is just a decoy picture.

I took the advice of the many who commented on my post about bees and wasps and resisted the impulse to use insect nets and jars to capture the wasps for a closer look.

Instead, I took the ‘safe’ route to figure out what was flying around my Star Magnolia. I stood a bit of a distance away, camera in hand, zoomed as much as it would zoom, and studied the situation.

It took me just a few minutes to determine the root cause of the wasp invasion.

I am a little embarrassed, actually a lot embarrassed, about the extent of the scale infestation on my Star Magnolia. I should have done more to keep it from getting to this point.

I actually first saw the scale late last summer and sprayed the magnolia several times with a dormant oil spray. This seemed to kill of the scale, or at least the scale that was on there flaked off if you flicked it with your finger nails. So I thought the problem was solved.

You do know scale is an insect, right, in the same family as aphids, which means it has sucking mouth parts? It sits on the branches of the tree as an adult, protected by its hard shell, sucking the life out of the plant. In the process it secrets a sugary substance, called honeydew, which attracts all the bees, wasps, and flies which I found buzzing around the tree. Over time, a sooty black mold will cover the leaves, feeding off the honeydew.

It sounds awful, and it is.

When I realized I had not killed off the scale, I was going to spray the tree immediately with horticultural oil. But I checked some online sources to see if that was the right thing to do.

Turns out, spraying now would be a waste of time. I assume the oil wouldn’t penetrate and smother the scale, with their hard shells. I need to wait until fall. What I can do now is use a brush to scrub off a lot of the scale. Doesn’t that sound like fun?

The bloom on the magnolia is too pretty not try. 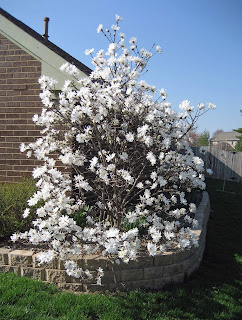 And now, you’ve been warned, the next picture is the scale itself. 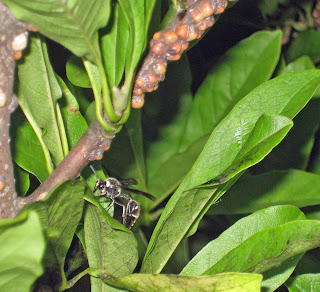 Don’t let this happen to your magnolia! Go out and check it for scale now!
insects trees