May Dreams Gardens Overtaken by Purslane 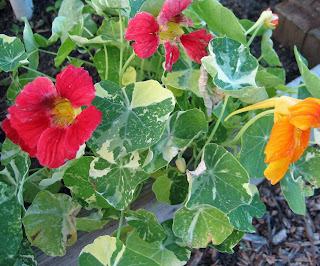 Not since Charles Dudley Warner wrote about purslane in his garden has there been a garden so infested with this weed as my very own vegetable garden here at May Dreams Gardens.

He said they "grow as if the devil is in them", and I believe that to be true. Every single raised bed in my garden was covered with this, what shall I call it, as 'weed' is too nice a word.

And wouldn't you know it, when the purslane was at its peak, an aunt and an uncle from out of town stopped by to see my garden.

How embarrassing! Caught with my purslane showing.

But not any more!

It was a beautiful day here at May Dreams Gardens 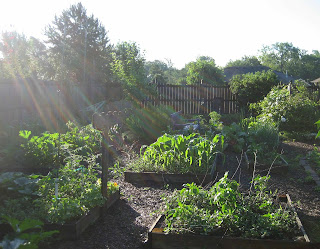 The garden shone in the morning sun, as did the purslane.

For those who are now wondering, what does purslane look like, here it is. 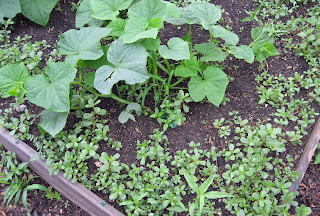 This is no ordinary weed. This is a weed that embodies all that we hate about weeds. It grows quickly. If a piece of it is left laying on the soil, it readily roots again. The seeds last forever and germinate into the tiniest, nearly impossible to remove, seedlings.

To take back my garden, I carefully chose my weapons. 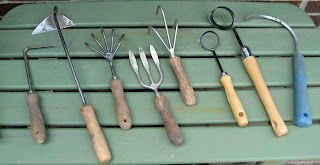 All of these are fine weeders, useful for different situations. But for the purslane, I used a combination of the Cape Cod Weeder on the far left, and the five prong cultivator, third from the left.

Working through one bed at a time, I used the Cape Cod weeder to dig the purslane out with a digging/slicing motion, and then I cultivated the area with the five prong cultivator.

I attacked the purslane, I embraced weeding.

Doesn't this bed look much better? 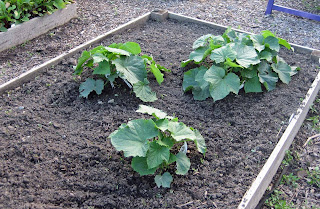 It took most of the afternoon, with a few breaks, to clean out all the beds. 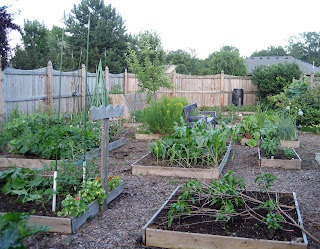 But as you can see, I have taken back the garden! I am back in control and the purslane is in a trash bag, waiting to meet its fate not in the compost bin but at the local city incinerator.

And soon I'll reap the rewards of my labor and hard work.

There are blooms a-plenty in the garden... squash, cucumbers, peppers, tomatoes and the nasturtium pictured above. And to think that most of the garden was planted just a little over a month ago, on May 26.

Some say that time stands still in a garden. That may be true some days, but in a vegetable garden, time sometimes runs as though there is a frost coming in a few months.
vegetable garden weeds