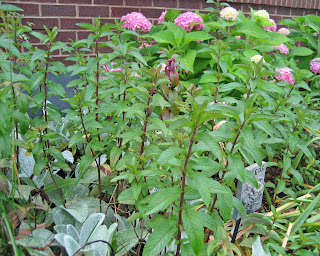 The Society for the Preservation and Propagation of Old-Time Gardening Wisdom, Lore, and Superstition (SPPOTGWLS or “the Society”) has been asked to consider a matter of great importance to all gardeners.

The following memo from the President of “the Society”, me, is to the attention of all members and other interested and interesting parties.

To All Members and Other Interested and Interesting Parties,

Greetings. As President and Secretary of “the Society”, I have been authorized to bring an important matter before all members, including those who recently joined by leaving a comment on the inaugural post of “the Society”.

What is decided regarding this matter could affect the sale and trade of certain plants for many generations, so it must be considered carefully. We take our responsibility quite seriously regarding leaving a legacy equal to or greater than that of those who gardened before us.

They also include wild self-seeding and spreading plants like ox-eye daisies, perennial sweet peas, false sunflower, obedient plant (not!) and evening primrose, to name a few. And let us not forget mint, one of the most seductive and spreading of all plants. (When it is called ‘Chocolate Mint’, even Madame President lets it grow in her garden though she ought to take a hoe to it. Which reminds me that I still need to provide an explanation about why one would have a hoe in the house, such that certain superstitions around it need to be followed.)

Having witnessed for myself that such plants or seeds for same have been offered for sale or passed along, I willingly bring forward this matter for consideration by “the Society”.

Now before certain members, including at least one sister of the President, accuse the President, me, of passing along to them plants from the list above, let it be known that such plants were accurately described and suitable warnings given before any plant was dug up and passed along. Plus the code words of “take all you want” were spoken ahead of time, indicating that these plants would spread, invade, take over, and otherwise claim as much garden space as allowed or not allowed, as the case may be.

The questions before the membership at this time are:

Should we take action to discourage the sale of these plants, which is unnecessary, as many of these are readily available from many gardeners, or if they are to be sold that they be clearly labeled as “thugs” and placed in a separate area of the garden center?

Can we as members of “the Society” take an oath not to give starts of these invasive plants to other gardeners, unless they are adequately warned and still beg for them?

Current and potential members may weigh in on this important matter brought before the society by leaving a comment. If any current or potential members have other business for the Society to consider, please indicate such via a comment or email.

Thank you for giving this your utmost and immediate attention,
Carol, May Dreams Gardens
President,
The Society for the Preservation and Propagation of Old-Time Gardening Wisdom, Lore, and Superstition (SPPOTGWLS or “the Society”)