Society for the Preservation and Propagation of Old-Time Gardening Wisdom, Lore, and Superstition 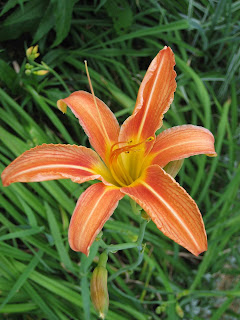 The Society for the Preservation and Propagation of Old-Time Gardening Wisdom, Lore, and Superstition (SPPOTGWLS or “the Society”) was recently formed and held their first meeting.

Members present included the founder, me, who has appointed herself President and Secretary.

The following minutes were recorded by the Secretary (me):

Carol, May Dreams Gardens, (me, again) was admonished for making up some old-time gardening superstition that was not based on any old time lore when she posted about orienting beans east/west when planting them. However, because she also posted about other known gardening wisdom, no sanctions were called for.

But, the society would like an explanation at some future time as to why she would have hoes in her house.

Based on comments received on the previous post about gardening superstitions, the Society sensed that some gardeners would like to do away with the long-standing superstition that thanking someone for giving them a passalong plant will cause it to not grow in the recipient’s garden. “It’s hard not to say thank you” says Pam/Digging, a potential member of the Society.

While the Society would like it known that just because something is hard to do is not a good reason not to do it, they are willing to consider a change to this superstition so that gardeners can thank each other for passalong plants without fear of killing the plants. In fact, the President of the Society (me) noted that she has thanked people for passalong plants without realizing it, with no ill effects.

By comment below, potential Society members (anyone) should indicate if they are in favor of changing this or would like to leave it as is. The official Book of Old Time Gardening Wisdom, Lore and Superstition will then be updated accordingly.

The Society then entertained a motion to adopt a new garden superstition offered by Annie in Austin,

“If you are planning to have people come over and look at your garden, do NOT speak the date of the visit aloud. If you do, the roses and daylilies will hear your plan and stubbornly bloom the day before and the day after but they will not open while the guests are there.”

The only current member (me) believes this to be valid superstition, as her Tiger Lilies, Hemerocallis fulva, pictured above, were not blooming on the day before bloom day, when she had to get her Garden Bloggers’ Bloom Day post up (as the hostess of bloom day) and so she ordered the wild daylilies not to bloom on the 15th as she recorded on her post that they were not blooming. But they bloomed anyway on the 15th, thus making a liar out of her. This proves that plants can hear us and do as they as please.

All in favor of this new superstition may indicate such agreement via a comment and if the motion is approved, this wisdom will be added to the Book of Old Time Gardening Wisdom, Lore and Superstition.

After discussion about how many bloom day posts the President (me) needs to view and comment on and exclamations about all the beautiful flowers blooming every where in June, the meeting was adjourned.

After the meeting, the members (me) enjoyed another bowl of fresh strawberries brought to the meeting by the President/Secretary (me, again). Let the minutes reflect they were delicious.

If any potential members have other business for the Society to consider, please indicate such via a comment or email.