Five Reasons To Have A Hoe In Your House

Why would someone have a hoe in their house?

I posted earlier in June about superstitions related to gardening, including a few that related to hoes:

“If you carry a hoe, spade, or shovel in the house, you must carry it out the same door you came in by, or a death will follow.”

My comeback on this one was “Death? I’ve carried a hoe in the house plenty of times, who hasn’t, but I must be carrying them out the same door I came in by as there haven't been any deaths that I can relate to any hoe carrying episode on my part”.

"Never carry a hoe into the house. If you do so by mistake, carry it out again, walking backward to avoid bad luck.”

I wrote that I didn’t believe this to be true either because I feel like I have lots of good luck and I sometimes carry a hoe into the house and I don’t walk out of the house backwards with it. I did suggest that maybe carrying more than one hoe in the house switches the luck from bad to good because I’ve done that a few times. Who hasn't?

Based on a few of the comments to that post, apparently a lot of gardeners haven't carried a hoe into the house. More than one fellow garden blogger actually commented that they want to know why someone would have a hoe in the house.

I can hardly believe that this would even come up as a question but nonetheless, it has, so I shall attempt to answer it.

Here are five reasons you might have a hoe or two in your house.

5. When you get a hoe in the mail, it is easier to carry the box into the entryway and open it there. Thus you end up with a hoe in the house.

4. If you get a hoe for Christmas, you end up with a hoe under the Christmas tree, which is of course, in a house, meaning, again, you have a hoe in the house, at least for awhile.

3. Old hoes need special care that you can only give them in a modern heated and air conditioned home. It stops the aging process. My aunt got me an old hoe that we decided was probably used by my great-grandfather. You don’t think I’d leave an old hoe like that in the garage, do you? No, it’s in the house. Sometimes I put it in the sunroom, other times, I rest it by the fireplace.

2. It’s a direct path from the garage, where most of the hoes are, through a short hallway, into the kitchen and breakfast area and out the back door. And some days that’s the route I take with hoe in hand to carry it to the backyard. My hoes are clean hoes so they don't track in a bunch of dirt or anything like that. Please don't think I live in a barn or a hovel!

But I guess I should carefully back out the back door when I do that.

And Annie in Austin was right with her comment, the last good reason you would have a hoe in your house...

1. Yes, the night blooming cereus is so big that I could hoe in its pot. And it’s in the house, so once again, if I did that, I’d have a hoe in the house. 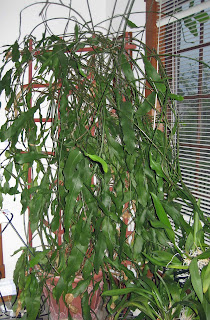 By the way, I’ve been looking at the night blooming cereus every day for several weeks to see if it has any flower buds on it. So far, it doesn’t. It is either going to be late blooming this year or it isn’t going to bloom at all.

I’ve decided to stop looking at it for a while, because ‘a watched plant never buds”. Later next week or the week after or sometime before the first frost, I’m going to haul the night bloomer outside and give it a good cleaning. That might shock it into blooming if it hasn’t bloomed by the time I do that.

I also believe that if you own more than one hoe, you’ll have good luck in the garden, and get twice as much done.

Try it, and let me know if it’s true for you, too.

Now, if there are any other questions about hoes, just ask. Don't be shy, leave a comment. I know hoes and if I don’t know, I’ll find out!
gardening hoes humor tools