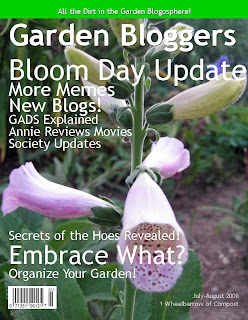 In my case, I’ve decided I subscribe to too many magazines, both gardening and non-gardening.

I’m overrun with magazines, some stacked on the floor, some semi-organized in magazine holders, others in baskets waiting to be read.

Everywhere I look, there are magazines.

It is like the proverbial elephant in the room, all those magazines. 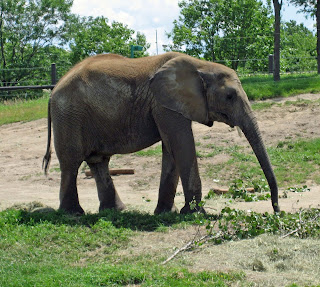 The magazines can no longer be ignored because as it turns out, there’s a limit to how many magazines can keep and how useful they are, even years later.

So, spurred on by a “Plurk” from Robin of Bumblebee and the Examiner announcing that she was making last week “organizing week”, I decided to round up all the magazines and deal with them. 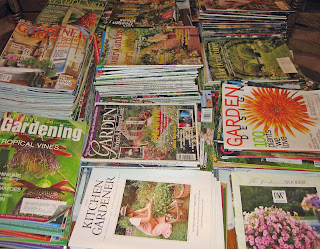 Quite a few stacks, I know, and the picture does not include all of them.

My older sister stopped by and took about 50 of them from me. Every time she picked one up and read out loud from the cover something like “Oh, this one has an article about Tasha Tudor, I’ll take that one”, I wanted to keep it.

There are a few other plurkers getting into the organizing spirit. After all, it is more fun when you know others are doing it, too.

So far, Leslie at Growing a Garden in Davis is organizing her recipes and Cindy at My Corner of Katy is going through some of her files. Anyone else?

I do actually like to have things more organized and straightened up, than the other way. I find it hard to work around clutter and disarray, unless it is straightened up “disarray”, or “disarray” that is in my control to straighten up.

I think that’s why when I go out to the garden, if the grass is tall, I’ll mow it first, so I have a nice background to do the rest of the gardening! Less disarray! Well, maybe not, maybe I just like to mow the lawn.

Anyway, I’m getting rid of old magazines and organizing those I decide to keep.

Then this morning I looked at the new blog of a colleague and he’s beginning the “great household purge”. I need that! I’m going to do that, because getting rid of what I no longer need or want will make it easier to organize.

I’ll start with the garden…

Magazines. I’ll give away the gardening magazines that I don’t want with strict orders to pass them along or recycle them when they are done with them. And I’ll reduce the number of new magazines I get. If I have any subscriptions for magazines that I rarely read that go beyond one year, I’m going to write and ask them to cancel the subscription and refund the unused portion of it, and donate that to charity. I’m still going to subscribe to a couple of the magazines… just not ALL of them.

Clay pots. I’ve got some ideas for some ways to use clay pots as sculpture in the garden. I saw something in a magazine, of all places, that looked easy enough to do. I’ll try it out and if I like the results, I’ll share them. If I don’t… who has some suggestions for re-using clay pots? (I’m not anti-magazine, by the way, I just need to figure out a way not to end up with so many.)

Plastic pots. I think I know a greenhouse owner who will take used plastic pots. I’ll stop by and ask her this weekend if she wants them.

Tools. Hey, let’s not get carried away with this. I’m not getting rid of the hoes, though there are a couple of worthless rakes I should get rid of and handful of trowels!

Books. I’ve got all my gardening books cataloged on LibraryThing, so I feel like they are organized. I just need to do some rearranging of the bookcases to get them all to fit. And truthfully, there are a few I could get rid of.

Catalogs. These go right to the recycle bin almost as soon as I get them, especially if I know I’m definitely not ordering from them. I need to find that place you notify to get your name off all the direct-mail marketing lists, so I get fewer catalogs, and do it soon before the Christmas catalogs start to arrive.

Seeds. I think I’m finally ready to get rid of some of the old seed packets…

Is anyone else interested in reducing stuff and organizing what’s left, especially related to the garden and garden shed? Feel free to join in, the more the merrier!

By the way, would you subscribe to that Garden Bloggers magazine shown above? Isn’t there a certain irony to subscribing to a printed magazine about online activities? Why, sure there is! And by the way, you know that’s not a real magazine, right? I made up that cover using this site.