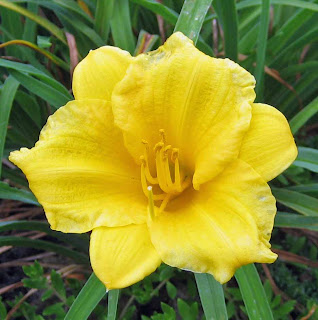 Goodbye, Stella (Hemerocallis ‘Stella de Oro’). It’s time for you to go. Life is too short and the garden is too small to give you all the space you are taking.

You’ve gone all commercial on me and I see you everywhere. You’ve grown common. It’s time… it’s just time.

But it’s not just you, it’s me, too. Don’t make me admit it! I’m not ashamed. Yes, I’ve been to a local daylily garden and well, it isn’t that I don’t like you any more, it’s that you’ve become so common and yellow compared to other daylilies.

You really are everywhere, and not just in my garden. Every time I turn around, I see you… at the mall, the gas station, in front of nearly every commercial building in town.

I guess we’ve just grown apart. And now I need the space you’re in for my new daylilies, or the ones I’m going to have once you’ve moved out.
Look at what’s out there!

I was amazed, again, by all the daylilies in bloom at Soules Garden when I went there for their annual summer open house.

I’ve gone before, I usually try to go every summer. But it was so overwhelming trying to decide what to get that I’d convince myself each year that I didn’t have any room for any more daylilies.

But then I got some focus. I found a way to connect with daylilies through the experience of other gardeners.

First, Gail at Clay and Limestone posted about her daylilies, particular the spider daylilies and I decided that I liked those and I should focus on getting some of them.

Then Dee at Red Dirt Ramblings posted about the Brother Charles Reckamp’s daylilies and I decided I should get some of those, too.

And so I went to the daylily farm, with focus.

I ended up talking to one of the owners for a few minutes and found out that he has collected many of Brother Charles’ daylilies, so now I’m convinced I’ve found my way, my focus, for daylilies. I’m sure I’ll be able to get a nice selection from him later this summer.

This is just one of the daylily fields at Soules Garden. 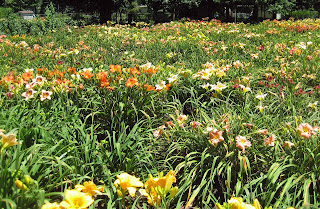 I think they have close to four acres altogether, but not all are planted in daylilies.

The owner held this bloom in his hand and said it was a perfect "Sabine Baur". 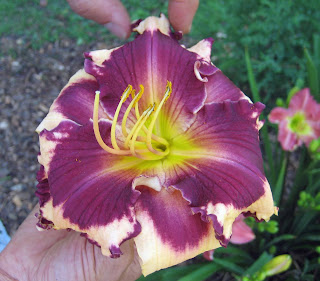 It's not a Reckamp and it ain't a spider type, but he was pretty excited about it, so maybe I should get one? See how I am keeping my focus?

I could hardly keep up in the conversation with the owner. He was pretty excited about the daylilies, in a contagious sort of way. Unfortunately, he couldn't show me many Reckamps because a lot of them bloom later, and will probably be in bloom 'next week'.

Now I have a reason to go back.

I think I should get this one, though I don't know it's name. 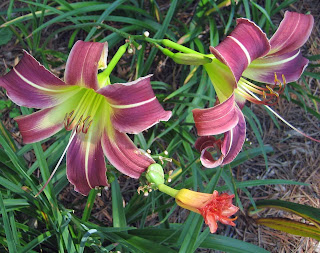 It's close enough to a spider type for me 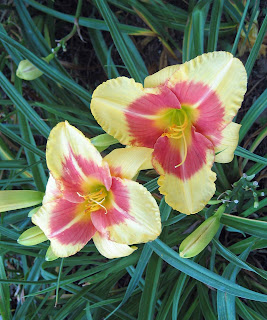 Maybe I should get one of these, whatever it is (told you I could hardly keep up).

Here's one of those spider type daylilies that I want. 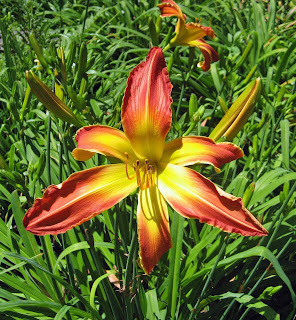 There was another yellow one, too.

It's a lot to see, so rest your eyes on this picture for a minute. 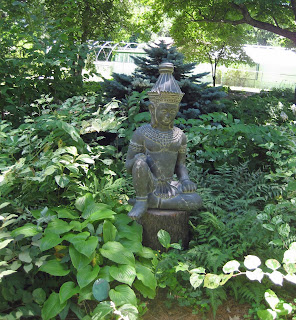 Over in the shade, I saw this little ground cover and thought it would look nice in my fairy garden. 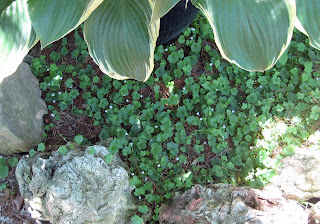 I asked about it, and one of the workers laughed and said "that stuff we throw away all the time, it's aggressive". Then she went to find out its name. It's Kenilworth Ivy, Cymbalaria muralis. She gave me a bag of it as I left, and I'm still deciding if I should actually plant it in my garden. It's so cute with it's little leaves and tiny flowers! Part of me says, "No, do not plant that under any circumstances!" The other part says, "What a cute ground cover that would be in the fairy garden!" Which one of me should I listen to?

How's this for a daylily that isn't yellow? 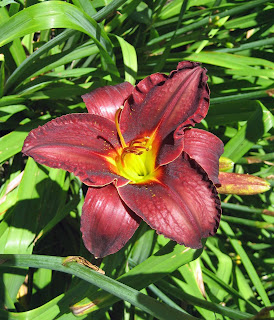 Something in this lighter shade of coral pink might do well in my garden. 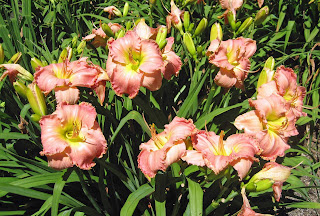 No, sorry, I don't know it's name, either. Did I mention they had hundreds and hundreds of different kinds of daylilies?

Now that I have finally found a focus (can't you tell?) in the vast world of daylilies, it’s time, past time, to say good-bye to Stella, to plant some other daylilies, starting with ‘Seminole Wind’, a free daylily they were giving to everyone who stopped by. 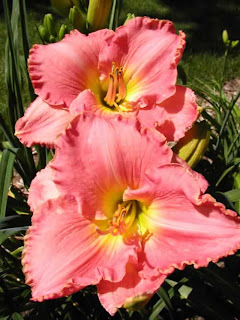 Stella, don’t make this so hard on me! Stop blooming, darn it.

Oh, don’t wilt. I’m sorry! Okay, Stella, you can stay, but not in the prime spots in the garden, is that okay? I’ll tuck you in here and there, maybe give you to some of the neighbors or my sisters.

After all, you do bloom and re-bloom, and you bloom early and you were one of the first flowers in this garden. I’ll admit your flowers are kind of pretty, and I guess it isn’t directly your fault everyone likes you and you ended up so common. Just promise you’ll behave around the new daylilies, okay?
ground covers perennials