Sibling Rivalry in the Garden 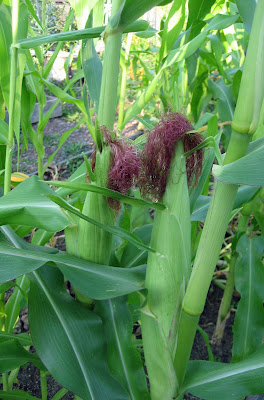 Sibling rivalry in the garden isn't what it used to be.

For example, for sweet corn, I always just assumed that my youngest sister and I were competing to grow the sweetest, earliest sweet corn of the summer. But my corn has just been okay this year, and I think it is a bit behind.

So when I went over to my sister's garden, ready to admit defeat, I was shocked to find out that this year, she didn't even plant sweet corn.

I checked with my older sister to find out how her sweet corn was doing and found out she didn't plant any either.

Let's move on to tomatoes.

My sister had these tomatoes all lined up on the window sill.

"Hey, Sis, some of those 'maters look awfully green to be a-picken them, what's going on?"

Turns out that her husband knocked them off while he was weeding. Now how does that happen? Well, they caged their tomatoes and some of the tomato plants were sprawling all over the ground, so when he moved the vines to weed around them, I guess some of the green tomatoes fell off. Oh, and the tomatoes were suffering from sun scald.

Based on this mis-treatment of tomatoes I've disqualified them from the tomato growing competition. But I didn't do it just because of the cages, though I ought to, I actually disqualified them for buying their tomato plants in the spring and not starting them from seed.

Those are the rules. I don't just make them up, I follow them, too. We can't have people just doing as they please and expect to win. Tomato plants must be started from seed and staked!

I'm not even going to mention, by the way, that she doesn't remember which varieties of tomatoes she has.

But I will say she had a lot of cherry tomatoes, and they were good.

My older sister also bought her tomato plants, so even if she doesn't have a ripe tomato yet, anyway, she's still disqualified.

I win again when it comes to the tomatoes.

Which brings us to green beans.

This competition is really just about having some to harvest, or not. My oldest sister does not have any beans to harvest because the bunnies ate her plants. And it wasn't my fault!

My youngest sister has green beans and has harvested some, but I had to disqualify her because I personally had to point out that she had green beans to harvest before she picked any. Apparently she hadn't been out to the garden for a few days.

But even if had not disqualified her and had instead let her stay in the competition, I still beat her to the first green bean harvest of the season, fair and square, so again...

I win all three competitions!