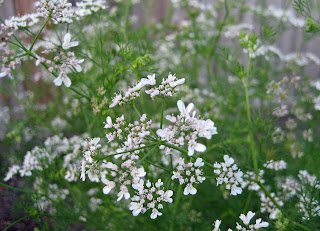 Do you think most gardeners are a bit… eccentric?

Are we that different from those who don’t garden?

I’ve been browsing through the 1961 edition of How to Grow Vegetables & Fruits by the Organic Method, edited by J. I. Rodale and staff. It’s funny to read it now, nearly 50 years after it was first published. They were so excited about organic gardening and mulch and compost!

If you’d like to read about some eccentric gardeners, this book would be a good place to start. There’s a write up starting on page 25 about Mrs. H. R. Leversee of Kalamazoo, Michigan who was quoted as saying “I like to work with plain dirt.”

And she did! According to the write up, nearly every day she set out with her wheelbarrow and shovel and walked up and down her street scooping up the dirt that “lines the gutters”. They estimated she transported 100 tons of dirt from the street to her garden over the course of 17 years and wore out three wheelbarrows.

An eccentric gardener? I’d say so. Her final quote… “Working is like walking. If you enjoy it you never notice it. I like to work with plain dirt. I like to see things grow in it. Every shovelful I take from along the curbs will produce food some day. I’ll never get tired of watching that happen.”

I bet her neighbor’s wondered what she was doing out there, nearly every day of the year, year after year. Maybe after awhile they got used to seeing her with her wheelbarrow and shovel, scooping up dirt? Maybe they thought she was just trying to keep the streets clean? Maybe she shared with them some of the vegetables from her garden, grown in their dirt?

One of my sisters, who shall remain nameless, once told me she thought I was the most likely in the family to become eccentric. I’ll have to ask her if she remembers saying that and if it is because I garden.

You might have thought me a bit odd, but hardly eccentric, this evening when I was out in the garden, seeing for the first time that all the rest of my sweet corn, which wasn’t a lot but was greatly anticipated, had been ruined by raccoons. They scratched and clawed at nearly every remaining ear out there! Mostly I was just muttering and looking at the destruction with disgust. Later I took pictures. 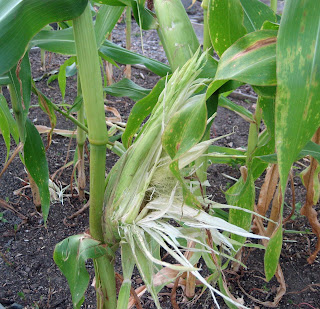 Or the other day, if you had watched over the fence as I made another video, this one called simply ‘The Gardener’, you might have wondered what was going on. After all, it took me two ‘takes’ to get this “triumph of video recording with a digital camera” recorded.

But I don’t know if I’ve reached the level of an ‘eccentric’ in her garden. Aren’t eccentrics old? I’m still too young!

Do you consider yourself a bit eccentric as a gardener? Do gardeners tend to be more eccentric than others?

(So, in wrapping up this post, I checked on the definition of eccentric. Why did they choose THAT clipart to show an eccentric person? I think I’ve just answered the question about “are gardeners considered eccentric”. Discuss amongst yourselves…)
gardening vegetable garden