Awaiting the Prodigal Tomato at May Dreams Gardens 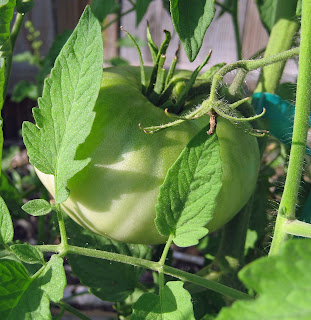 This will be the latest I’ve ever harvested the first ripe tomato in the garden.

The old records have been checked and double-checked. I did not want to set a new record.

Here are the dates for the first tomato harvests since 2001:

I see no big tomatoes even close to ripening out in the garden so apparently I'm not just going to break the record, I'm going to smash it, cream it, obliterate it, annihilate it, and otherwise destroy it.

So now decisions have to be made for when I do pick that first tomato.

Should I treat it with the same reverence and joy I’ve lavished on other first tomatoes in past years, even though it is ripening so late? Like the prodigal son who finally returns, does the date really matter that much as long as a tomato eventually ripens?

Yes, I’ve been harvesting cherry tomatoes, a few, then a handful and soon I’ll need to take a bowl out with me to the garden to harvest all the cherry tomatoes. But I’ve already posted that cherry tomatoes do not count as first tomatoes!

But it isn’t just about the record.

It’s about my pride as a gardener, the daughter of a gardener who always had early tomatoes, as early as late June, in this same hardiness zone.

I've been going back in my mind through mid-summer, early summer, spring, and seed sowing time to figure out what happened. Why are my tomatoes so late to ripen? Did I do something wrong?

I think I started the seeds in plenty of time. But, I'll admit I left them in the Jiffy strip pots the whole time and didn't pot them up. I should have moved them up to bigger containers.

Then it was cold and rainy in May, so I planted them out in the garden a few days later than I would have liked.

In June, the tomato plants seemed to just sit there because it rained so much, more than anyone has ever seen it rain around here and they almost drowned out there.

And then I heard today that July was cooler than normal around here. Tomatoes like it a little on the warm side.

I'm not trying to make excuses, but it appears that much of this is not my fault.

But regardless of who or what is to blame, I just want a big, red, ripe homegrown tomato now!

As long as I’ve been gardening, and even going back to my Dad’s garden, where he reigned as king of the earliest ripe tomatoes, I’ve become accustomed to enjoying home grown tomatoes before August.

But I’m going to be strong, and brave, and patient. Because I know that eventually a tomato will ripen, and then it will be time to get out the satin pillow, the Book of First Tomatoes… and treat this tomato with as much reference and joy, perhaps even more joy, as any other first tomato, even though it is going to be later this year.

It will be the Prodigal Tomato, whenever it does ripen.
vegetable garden