I Have Grown The World's Ugliest Tomato 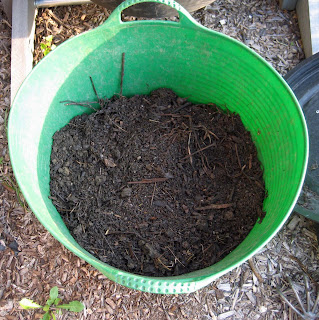 Plants grow themselves, compost happens and then inspiration strikes in a garden.

I was full of the lazy gardener’s lament this evening, thinking about all the weeding, harvesting, pruning and deadheading I haven't done like I should.

After all, I can’t harvest tomatoes if they aren’t ripe, can I?

But I do blame myself for waiting at least six weeks after it was ‘done’ to harvest the second batch of compost from my compost tumbler.

I know I haven’t mulched enough this year, another lament, and so I was thrilled to finally harvest two tubtrugs full of compost this evening, which I promptly spread on some nearby marigolds and zinnias.

Those marigolds and zinnias are bravely growing where some ratty ol’ Forsythia used to be, in some poor, tired dirt, so they deserved the compost more than other flowers. 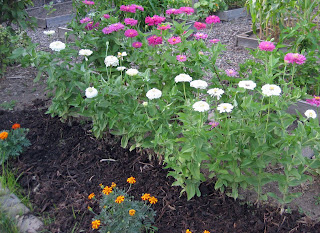 They are proof that plants grows themselves, with not much of a helping hand from the gardener, other than I cleared that bed and sowed the seeds.

Aren't those nice straight rows? I really do need to concentrate on planting more randomly or at least in curves.

The weeds have no problems growing randomly all over the place, all by themselves. They are a little too ‘successful’ this year, and I’ve got some catching up to do to get ‘em before they set seed.

Thanks to reader Lisa Blair of A Shower Fresh Garden, I believe my mystery weed is False Daisy, Eclipta prostrata. Bad weed. I pulled more of it with a vengeance this evening, with a renewed sense of who the enemy is. It's False Daisy! It's an annual weed around here, so I don’t want to let it set seed!

And thank goodness it doesn’t appear to be edible like purslane, so I feel no guilt about pulling it out and throwing it on the compost pile. Not that I feel guilty about throwing out the purslane…

So with all the weeds and the overflowing compost bins, it was easy to fill the tumbler up again with a good mix of brown and green garden waste and then give it a couple of fast spins. I’m marking my calendar hoping to have another batch of compost in early September.

But before early September, I will surely harvest a nice ripe tomato, too. A nice one. Not one like this. 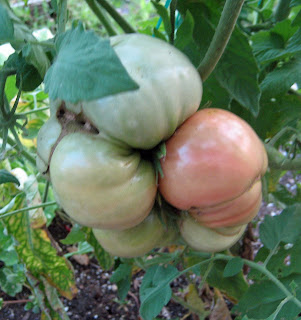 I declare this to be the World’s Ugliest Tomato.

And it is the only one turning red in my garden so far. Can you believe that? I’ve been waiting all this extra time for the first big, ripe tomato, and it looks like it is going to be this ugly one.

So in keeping with my goal of winning any tomato contest I have, I’m issuing a challenge to all garden bloggers to show us your ugliest tomato. The only rules are it has to be ripe AND you have to eat it.

So don’t show me a bunch of tomatoes with blossom end rot or anything like that. Post a picture of your best, ugliest, edible tomato. Go ahead, but I know mine is the ugliest! And all decisions of the judges are final!
vegetable garden