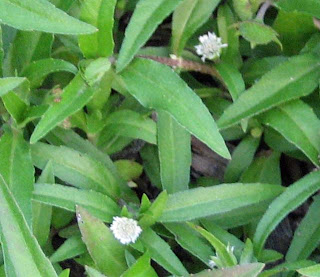 A few years ago, seemingly out of nowhere, this weed appeared in my vegetable garden.

It likes to grow along the outside edges of the raised beds, right by the wood edging, plus in the paths and really everywhere. It's a prostrate spreader but is fairly easy to pull up, especially if you use a Cape Code Weeder or short-handed Cobrahead.

I should know, as I pulled a lot of it today, mostly with the Cobrahead.

And I still have a lot of it to pull. So if anyone can give it a name, I'd be grateful, because I like to know the names of the weeds I'm pulling.

Who knows, it might be one of those edible weeds like chickweed (Stellaria media), dandelions (Taraxacum officinale) and purslane (Portulaca oleracea).

Oh, and add plaintain (Plantago major) to the list of supposedly delicious, edible weeds. My aunt sent me an email saying that she read in their local paper that plaintain is high in vitamin C and can be eaten when the leaves are young, either cooked or in salads. It is supposed to taste like mushrooms.

But I'll never know because I don't plan to try it.

Even though I don't have a ripe tomato yet and my squash plants are kaput from the squash borers and the cucumbers are mostly bitter, I'm not hungry enough, yet, to eat the weeds.

Supposedly weeds tell you something about your garden, about the soil. I think my weeds are telling me, "get out here and weed, even us weeds are feeling all crowded out by each other".

And in addition to the weeds telling me stuff, I felt like the sunflowers were watching me work out there, too. 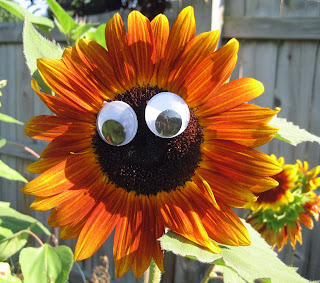 But I wasn't intimidated by the sunflowers, I just kept humming along, embracing the weeding, thinking about what the weeds teach us.

I did do a lot of weeding today, and got about half of the vegetable garden cleaned up. So if you go out there to see it, turn to the left, that's the half that I've weeded. I'll finish the rest up through the week.

If you want to see my mystery weed up close, turn to the right, there's still a lot of it to see. 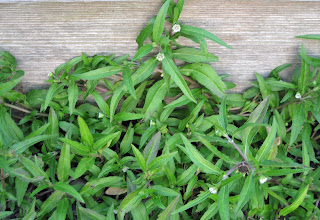 If you want my gratitude, tell me what this weed is!
annuals humor vegetable garden weeds