When the Cicadas Sing, Starting Making Plans For Houseplants 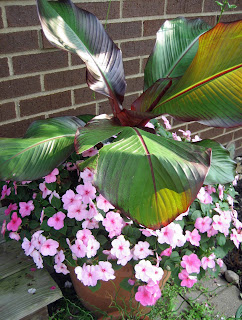 If I didn't have a calendar, I'd still know that fall is coming because of the constant singing of the cicadas up in the trees.

And with fall approaching, I'm starting to make some choices about which plants I'll bring inside to save them from the killing frost.

Yes, I said killing frost and it is still August. The killing frost (oops, wrote it again) is still hopefully about two months from now, but it never hurts to plan in advance.

First, I need to figure out what to do with the Red Banana plants, Ensete maurelii. I really like them and would like to save them. This is a picture taken in early July. They are now twice as big!

Fortunately, Proven Winners has some good instructions on what to do to winter them over. I think I'll choose the option of keeping them in the garage.

I've already decided that this Euphorbia 'Diamond Frost' is spending the winter in the sunroom. 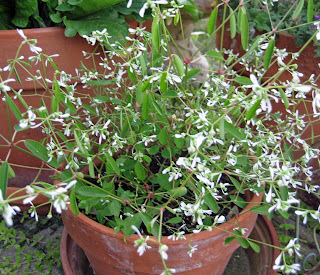 It was a little "runt" of a plant when I bought it, the last one the garden center had, so I'm kind of fond of it. It jumped into my cart, honest!

I think it will get a bit leggy inside, but should survive, and then I can cut it back next spring when I put it back outside.

This old-fashioned Streptocarpus is also coming inside for the winter. 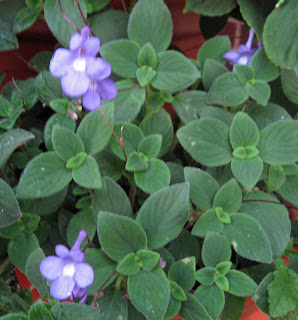 It's generally a houseplant around here, anyway. It was an impulse purchase this spring. Did you know I bought plants on impulse like that?

I also have a purple-leaved plant I call "Moses-in-the-Cradle" that I got a start of from Annie in Austin, so I am definitely bringing it inside well before the first frost. (There's that bad "frost" word again, sorry if that gave you chills.)

And of course, I'm bringing back into the house all the Clivia plants and the poinsettias that I set outside for the summer.

Just about the only plants that could make it inside in the winter that I'm not bringing in are three ginormous Boston ferns, Nephrolepis exaltata, hanging on the front porch. They would do okay inside, but I would have to sweep up leaves all winter long. Who needs that?

When I bring plants back inside for the fall and winter, I take several precautions to give them the best chance of making it through until spring without ending up with an invasion of pests inside my house. My precautions include:

- Bring them in well before the first frost. Some tropical plants, especially, don't even like temperatures in the 40's. Plus, the cooler temperatures often are the signal for the plants to start going dormant. I plan to start bringing some plants inside as early as Labor Day weekend.

- Repot them if I can. I know that fall is not the time to replant houseplants. Spring is preferred, but I don't want to bring in the pots that have been outside all summer with all the creatures that live in them now... like pill bugs, millipedes, and spiders, just to name a few. So I take my chances and repot the plants.

- Check them thoroughly for pests, especially the undersides of the leaves. I know, by the way, that I still have a big problem with mealybugs on the Clivia lilies that I set outside. I'll have to start now trying to get rid of them. (Mealybugs are also still a problem inside, unfortunately. I've been battling it for years.)

- Give them a little bit of fertilizer for a little boost going into winter. Then I don't fertilize them all winter, just water them when needed (which isn't as often as most people think.)

Does anyone else bring plants in for the winter? What do you do to ensure they'll survive until spring?
houseplants

Nancy J. Bond said…
The cicadas have been "singing" here for a couple of weeks now. You're right, it always speaks of a change in the season. I don't bring any plants inside purely from lack of place to keep them. :) I hope that first frost is along ways off!
Sun Aug 17, 11:19:00 PM 2008

Anonymous said…
I wasn't going to bring in my Diamond Frost until you said something about it. I will now! I'm bringing in my geraniums too. I've got to figure out how to save my Silver Falls Dichondra. I want to make many out of that one plant. I love that thing. I'm sure there are others too.

See, in Houston, we may or may not get a "killing frost" in a winter at all....or we might get a series of 10 or 12 of them. The coldest winter I've had here was about 6 years ago, when we had a whole WEEK of weather below 30 degrees.

That was as brutal a winter as I ever want to live with.

The last two winters, I've snuggled up my potted plants up around my water features and covered them up with a frost cloth (white, opaque, but lets light in) and perhaps a plastic cover over that if it's to get REALLY bad, or the plants are really tender.

I've not lost that many, but it means that the biggest part of my garden is "put away" for a couple of months, from December or so..until February or even March.

I will be growing tomatoes again this fall/winter, as it was just to dadblamed hot to grow them this summer. (I harvested tomatoes in January last winter)
Mon Aug 18, 03:05:00 AM 2008

Annie in Austin said…
You managed to take that piece of Purple Heart home from Spring Fling on the airplane and keep it alive, Carol? That could have been another gardening olympic entry ;-]

I'll bring the Meyer Lemon in and out of the kitchen if/when we get a freeze. The two Plumerias, variegated ginger and maybe the orchid tree will go in the garage. I put the Thanksgiving cactus on the veranda for the summer and will leave them out as long as possible before frost to set buds.

Your list of wonderful inside plants is pretty big - how lovely it must be to have a sunroom for them!

Gail said…
The problem with having a housecat is that I can't have houseplants! They never attempt to jump into the cart when I am nursery shopping; apparently they can sense that the cat will eat them! Frost...sometimes we don't have a killing frost until November.
Mon Aug 18, 12:12:00 PM 2008

Anonymous said…
Carol, this is a great heads up. There are some plants I would be heartbroken to lose to winter, though we do not have the cicadas to warn us, and I imagine winter to be at least three months away. I love Indian Summer here in California. I will treasure every minute. Besides, I need this time for my pumpkins to grow! The females have finally emerged after months of only male flowers!
Mon Aug 18, 05:01:00 PM 2008

~Laurie said…
I have to bring in my navel orange tree as I live in Pennsylvania. I too have diamond frost in a pot outdoors, never thought about bringing it in for the winter. Thanks for the idea!
Mon Aug 18, 05:29:00 PM 2008

growingagardenindavis said…
I'll have to move my succulents under the patio but not for about three months. I don't put house plants out for the summer...it's too hot here. Mostly I cover sensitive plants if frost threatens...a few times each winter.
Wed Aug 20, 01:39:00 PM 2008

Debbie said…
Carol, I bring in my tender water plants from the garden pond. They don't get anything fancy, I plastic tub and plenty of water is all that is needed to winter them over inside.

Fall is definitely around the corner here in NNY. There are quite a few trees with color already...just a branch or two, but I was surprised as I drove around today. Also, the we had 43 degrees this morning. A bit too nippy for me for August, but I guess that is how it goes.
Thu Aug 21, 12:37:00 AM 2008