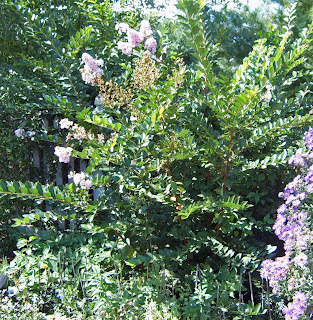 How will southern gardeners react when they find out that we can grow Crape Myrtles here in Indiana?

I expect some might say, “No fair, you’ve already got lilacs!”

Others might say, “Good, you can have ‘em, never much cared for them anyway.”

Or maybe some would say, “Oh, good for you, they really do add some nice color to the summer and early fall garden.”

Regardless, ha! We can grow Crape Myrtles in Indiana!

I saw some the other day at Lowes.

Now, normally, just because a plant shows up at Lowes, I don’t assume it is good to plant it in my garden. But, my own sister has two Crape Myrtles growing quite well in her Indianapolis garden, so I wasn't all that surprised to see them at Lowes.

That’s one of her Crape Myrtles pictured above.

In case you think hers are just a fluke, or were a bit skeptical like I was, I also got an email recently from a reader in Michigan with pictures of Crape Myrtles growing “clear up there”!

Here are the ones I saw for sale at Lowes. 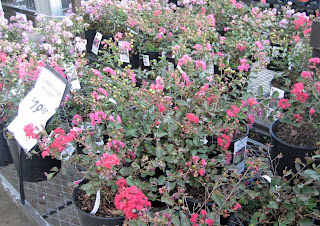 And here’s a picture of one growing near Coldwater, Michigan sent by reader, Stephen A. 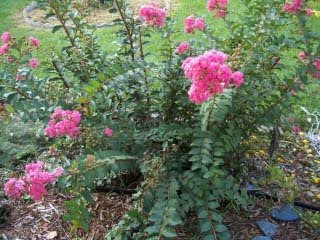 That area of Michigan is also zone 5, like Indiana.

Those I saw at Lowes were primarily Lagerstroemia indica, which surprised me because according to this Clemson University website, Lagerstroemia faurei is the more cold hardy species. Funny thing, too, on the Clemson website they are spelling the common name as Crapemyrtle, all one word, but in the web address they spelled it “crepe”. I know it isn’t “crepe”, but is it one word or two?

The tag on the ones at Lowes mentioned them being “root hardy” which usually means the branches die back over the winter, and new branches come up from the roots in the spring. This is what Caryopteris and Buddleia do when we grow them here.

I asked my sister and she said that does cut hers back each year like a butterfly bush. Based on that, I wouldn’t expect any Crape Myrtles around here to become big trees or huge shrubs. But for gardeners who would be satisified to have a few Crape Myrtle blooms in their zone 5 garden, regardless of what size the plant grows to in one season, it might be worth the effort.

So what say you, southern gardeners, are you happy for us, that we can have Crape Myrtles in Indiana?