Embrace The End of The Growing Season For A Happier Life 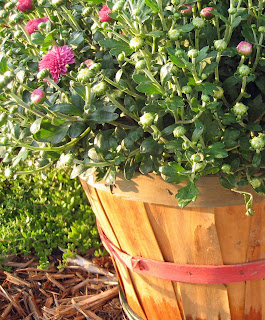 There are many signs that it is the end of the growing season in my garden.

The foxtails in the garden are taller than the tomato plants. In fact I’ve almost forgotten there are tomato plants in the vegetable garden because they are all falling down by their stakes, getting lost in the weeds. (Okay, there aren’t that many weeds out there, but the tomato plants are a mess.)

When I go into the big box stores and instinctively head to the “garden/seasonal” center, I run smack dab into a giant life size talking Santa statue, right next to a display of tulip bulbs marked down for “final clearance”.

The trees in the garden have all shed their leaves. I see the leaves on the ground and realize that once again, garden fairies aren’t going to come and magically take them away, so I rake them up or mow them to chop them up.

“The frost is on the punkin”. This usually happens around the middle of October in my garden, but could happen sooner than that, or later than that. (I don’t really have any pumpkins and we don’t really say “punkin” in Indiana… okay sometimes we do when we are reciting this poem by Hoosier poet James Whticomb Riley).

Regardless of what signs you look for, there is going to be an end of the season for your garden, unless you live in the tropics.

It’s inevitable, so move on and…

Why fight the end of the season? I’ve seen some people attempt to cover their annuals and frost-tender plants in the fall the first time the weatherman says “frost”. They bring out old sheets, bedspreads, table cloths, and sometimes plastic sheeting, to carefully cover their plants. Again I ask why? Does it gain them an extra week? Maybe. A month? Rarely, unless it is an extremely early frost.

I’ve seen people take a sheet or plastic trash bag and throw it over a small tree to protect it from frost, and then tie it closed right below where the branching stops, especially in the spring. Not only does the tree look like a ridiculous giant plastic covered lollipop, it isn't really protected from the frost. Why? No radiant heat.

By the way, be careful if you are using plastic sheeting to cover plants. It traps too much moisture, so should be removed promptly in the morning, provided the air temperature is above freezing once the sun is out. Also, if the plastic is left on during the day, heat can quickly build up under it and where the leaves touch the plastic, they can be scorched by too much heat directly on them.

Save yourself both time and worry and forget about covering plants in the fall.

Even after the first frost, there is still plenty of life in the garden. There will be flowers still blooming, like asters, mums, stonecrop, and pansies; leaves changing colors; and wildlife running back and forth in an entertaining manner eating seeds, nuts, and any fruit that falls to the ground.

In the vegetable garden, there can still be lettuce, spinach, radishes, and other cool season crops, just waiting to be eaten. And out in the compost bin? 'Mysterious processes' have made black gold, compost, ready to harvest. (Yes, the process of how compost happens is well known and understood, but it still seems mysterious and miraculous that such a process happens. Good thing, too, or we would be buried under plant debris by now.)

And should you think there is nothing to do in the garden at the end of the season… look around, you’ll find stuff to do, like fall clean up and preparing new planting beds.

It’s good to do some fall clean up, such as removing diseased plants and frost-blackened annuals, but don’t leave your garden clean swept at the end of the season, like you are closing up a summer cabin. Birds and beasts alike benefit from a bit of messiness in the garden, so do what you need to do to be happy and content, but leave some seed heads for the birds and some brush for the beasts.

And should the weather cooperate, the end of the growing season, fall, is a great time to prepare new planting beds for the spring.

Other Embraces for a Happier Life