Embrace Seeds For A Happier Life 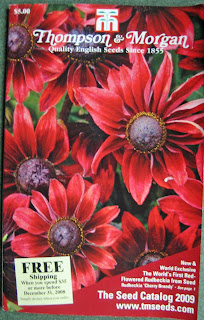 It seems that everyone wants to push the seasons.

(Well sure I write down in my garden journal when I get my first seed catalog each year. Don’t you? I don’t record when all of the catalogs arrive, there are too many for that, but I generally note when I get the first one.

It’s always from Thompson & Morgan and generally arrives in October. They are certainly a hopeful seed company. They send a catalog to me faithfully every year, even though I haven’t ordered any seeds from them in at least five or six years. In fact, I’ll probably get five or six more catalogs from them between now and March.)

I have a whole process for dealing with seed catalogs and seeds, but I don’t really start that process until after the first of the year. For now, I just let the seed catalogs pile up in a corner and keep my attention focused on the beauty of fall in the garden and the upcoming holidays, and try to enjoy it all, one event at a time.

Then after the first of the year, I open the seed catalogs and let the dreaming begin.

I wouldn’t even think of gardening without seeds, but I’ve heard rumors that there are some actual gardeners who don’t “do seeds”.

At first, I didn’t believe it.

But as I’ve written and posted about seeds, I’ve gotten a few comments and emails from some of these “seedless gardeners”, so I know they exist. They have their reasons, and I suppose those reasons make sense to them. I just don’t quite understand them and their “don’t” or “can’t” attitude about seeds.

There’s very little about gardening, including seeds, that I won’t try at least once, as long as it is legal, but that’s a subject for another post. For now, I’ll just try not to be a haughtyculturist about this whole seedy business.

But I will say embrace seeds for a happier life.

Buying seeds is often the only way to get many varieties of vegetables and some flowers.

Sowing seeds can be a more economical way to grow some plants, especially easy to grow annuals, vegetables, etc.

Sowing seeds is often the best way to ensure success with many flowers and vegetables and other plants that don’t transplant well.

Sowing a tiny little seed, maybe one that is no bigger than a gnat’s eye, and watching it grow is a very rewarding experience.

Embrace seeds for a happier life.